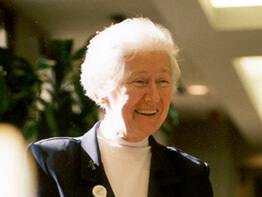 Do not make the mistake of calling Sister Annella Martin, R.S.M., a former nurse.
Although she’s been a nun for 50 years now, the Waverly native has not gone far from her roots as a medical ward nurse at Mercy Hospital in the 1950s, a position she held for seven years after graduating from Seton and from Mercy’s nursing school.

In fact, the needs of those patients inspired her to join the Sisters of Mercy.

“It was the people I worked with – most of them had nothing,” she said. “So I got called and I went.”

She later served as a nurse educator and as director of the hospital’s nursing school. Today, Sister Annella, 78, is the internal auditor for the medical center, and although she’s earned 28 credits in informatics, the field that combines nursing data with computers, she still sees herself as a nurse. After all, she’s still educating patients; after having had a knee replacement herself, she talks about what it’s like to patients facing one.

But she’s best known as the unofficial historian for Mercy – and for all things Irish, thanks to her nine visits to Ireland and her hobby of researching her own genealogy.

“I like history,” she said. “I like the history of Baltimore. I listened to my grandparents, and it’s the same thing with the sisters – they would talk and you’d get little tidbits and I’d save them.”

She’s particularly fascinated by medical history and has pored over doctors’ records from the 1800s. She is quick to point out that a Mercy doctor invented the modern vaginal speculum, and it was in the original Mercy Hospital – known as City Hospital because of its location on the corner of Saratoga Street at the city’s springs – that the rabies vaccine was used for the first time in Baltimore.
History captivates her because “it tells the story of the world and our lives. We ignore history, but history does repeat and I find it fascinating.”

“She is a wonderful repository of information about the history and the people and their stories of the medical center,” says Sister Helen Amos, R.S.M., executive chair of Mercy’s Board of Trustees, noting that Sister Annella has spent her entire career at Mercy, which, combined with a friendly and outgoing nature, has garnered her many contacts.

Sister Annella has researched how Mercy responded to the Great Fire – the hospital treated and fed firefighters while the sisters bravely stayed with patients who couldn’t be evacuated – but she also plans celebrations for today’s departments.

Many of her inspirations, she said, come from the quirky way her mind works. When she glimpsed a donation box for glasses outside of an ophthalmology office, she remembered that a doctor used to travel to Guyana to provide eye surgery. She contacted the Hospital’s Auxiliary, which teamed with the Lions Club to organize a drive, and the Sisters of Mercy teaching in Guyana. In April, those sisters will receive much-needed eyeglasses. She’s also deeply involved in the Mercy Associates and working on an online newsletter for them.

“There’s a lot to do – I just have to wait until the connections happen in my head and then move on it,” she says.

Speaking of connections, she knows that people want to be informed but they don’t want their inboxes clogged with lengthy e-mails. Her solution? She’s in the process of creating a blog.
Sister Annella cherishes connections, whether they’re the ones in her head, online or among the Mercy community.

“I really love what I do, and I love being a Sister of Mercy,” she says.