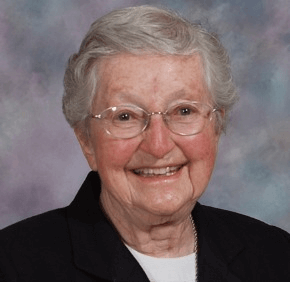 By Catholic Review Staff
A funeral Mass was offered for Sister Ann Rosaire Bradley of the Sisters of St. Francis of Philadelphia June 7 at Assisi House in Aston, Pa. She died May 28; she was 92.
Born in Philadelphia, Sister Ann Rosaire entered the congregation in 1942 and professed her first vows in 1945. She was a member of the Sisters of St. Francis of Philadelphia for 71 years.
She earned a bachelor’s degree in education from what is now Mount St. Mary’s University in Emmitsburg as well as a master’s degree in education from The Catholic University of America in Washington, D.C.
Sister Ann Rosaire served primarily in education and later in parish ministry.
During her 13 years ministering in the Archdiocese of Baltimore, she taught at the former St. Anthony School and the former Little Flower School, both in Baltimore.
Sister Ann Rosaire also ministered in Delaware, Florida, Washington State, and, for 43 years, in the Archdiocese of Philadelphia.
In 2010, she moved to Assisi House, where she served in prayer ministry until her death.