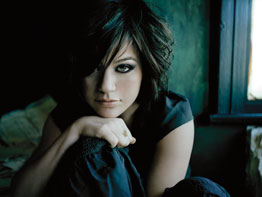 NEW YORK – Performing for a papal event is not just another gig, even for those whose names are usually rendered in boldface type.

Headline entertainers who will sing for the crowds assembled to greet the pope at St. Joseph’s Seminary in Yonkers and at Yankee Stadium in the Bronx spoke of the opportunity as a singular experience and one they are eagerly anticipating.

Kelly Clarkson, 25, a pop singer who gained national attention by winning the inaugural “American Idol” competition in 2002, will sing several of her standards for the youths awaiting the pope in Yonkers April 19.

When the pope arrives, she will sing “Ave Maria” by Franz Schubert. Through her publicist, she said, “I was so excited to be asked to sing for the pope! I grew up singing church music, and it’s always been a dream of mine to perform ‘Ave Maria.’ To have that dream come true on such a special occasion is truly a blessing.”

Ms. Clarkson, who was raised Baptist, will return from a European performance tour as the pope arrives in the United States.

In an interview with Catholic News Service, Mr. Feliciano’s wife, Susan Feliciano, said: “This is a great gift, the opportunity of a lifetime, to be able to participate in something so special.”

She said the family attends the Church of the Assumption in Westport, where Mr. Feliciano is a lector, she is a catechist and Eucharistic minister and their three children are altar servers.

Mr. Feliciano performed at the Vatican in 1997 with Andre Bocelli.

Metropolitan Opera tenor Marcello Giordani will sing before and during the Mass at Yankee Stadium. In the early afternoon, he will perform the Giacomo Puccini aria “Nessun Dorma” from the opera “Turandot.” At Mass, he will sing “Panis Angelicus” by Cesar Franck.

Mr. Giordani, who has sung at St. Patrick’s Cathedral, was invited to sing by New York Cardinal Edward M. Egan. Giordani told CNS that he, his wife and their two children attend St. Patrick’s during the months they live in New York.

“It’s a great honor for me to sing for the pope. It’s my first experience and I’m real excited. The pope is our icon; he’s Jesus on earth,” he said.

Mr. Giordani said he has performed, without a microphone, at outdoor venues in Italy and France, but never in one as large as Yankee Stadium. Asked if he might be nervous performing for Pope Benedict and 55,000 Massgoers, the tenor said, “I will close my eyes and sing.”

The Irish singer Dana will also perform at the stadium. She has sung at papal events in the past, including World Youth Day in 1993, 1997 and 2002. She also sang at the Superdome in New Orleans when Pope John Paul II visited there in 1987.

Salvatore Licitra, a tenor with the Metropolitan Opera, will sing at the pope’s Mass at St. Patrick’s Cathedral April 19. He will perform “Domine Deus,” from “Messe Petit Solennelle” by Gioachino Rossini.

In Washington, tenor Placido Domingo and mezzo-soprano Denyce Graves will sing at the Mass at Nationals Park April 17.

Mr. Domingo, general director of the Washington National Opera, will sing Franck’s “Panis Angelicus” Communion, and Graves will sing “We Are One in the Spirit” just before the processional.

Stig Edgren is the producer for the entertainment portions of the New York events. He performed a similar role for Pope John Paul’s visits to Dodger Stadium and the Los Angeles Coliseum in 1987 and Central Park in New York in 1995.

Mr. Edgren told CNS that each of the New York events will have its own flow. He said that the two-hour Yankee Stadium program will be marked by “pageantry and an orchestral, classical feel.” He said that Benoit Jutras, musical director and principal composer for Cirque Du Soleil has written a piece for the processional of the standard-bearers for Mass.

“I knew what type of music I wanted,” Edgren said. “I gave a list to Cardinal Egan and I asked Harry Connick Jr. to write opening and closing pieces” for the pre-Mass program.

The musical program includes well-known entertainers in addition to choirs and orchestras assembled from throughout the Archdiocese of New York. The choirs include the Harlem Gospel Choir and the West Point Cadet Choir, from the U.S. Military Academy.

Mr. Edgren said, “I wanted to stick with the orchestral feel and not make this a parade of stars.”

The four-hour program in Yonkers, he said, “will have more of a festive atmosphere” than Yankee Stadium. He said he wanted to “keep it young” and is using alternative rock, Christian rock bands and closing the show with Clarkson. He said that he booked Clarkson as soon as he took the assignment. “I was looking for an artist who was a good role model, a success, with no scandals.”

The program will showcase more than two dozen entertainers, many of whom are drawn from the schools and parishes of the Archdiocese of New York.

Comparing these papal entertainment programs with ones he has previously produced, Mr. Edgren said, “There’s a different setting, a different pope, a different cardinal, but it all works. I base my part of the program – the pre-Mass events – on the venue.”

He added that the Mass is not his area of responsibility – and deals with an even higher authority.