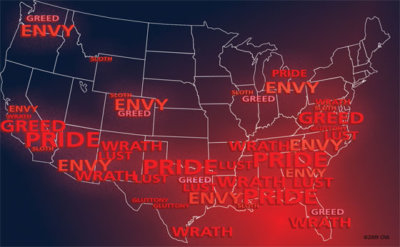 WASHINGTON – How much sin is in America?

It depends on where you live, according to four Kansas State University geography researchers.

In what researcher Thomas Vought described as a not-too-serious study meant to garner attention at a convention of geographers in Las Vegas as much as to contribute to understanding the habits of people around the country, the foursome found that the South – encompassing an arc from North Carolina through Louisiana – was most prone to the traditional seven deadly sins.

And the least sinful areas?

The Midwest and western Appalachia, the study’s findings showed.

Lest Southerners beg to differ, Vought told Catholic News Service the study is not meant to serve as an authoritative review of the country’s sinfulness.

“I don’t think we started this to send a message to anyone,” he said. “It was a fun exercise.”

The study revolved around the traditional seven deadly sins: lust, gluttony, greed, sloth, wrath, envy and pride. Vought explained that the researchers wanted to use objective data to help in their analysis to avoid subjectivity and bias. So they turned to census data, FBI crime reports and Department of Health and Human Services statistics.

Plotting the data by county, the researchers were able to project where each of the seven deadly sins were more prevalent or less prevalent.

Here is how the Kansas State researchers calculated the sinfulness of any one region:

– Sloth: expenditures per capita on entertainment and recreation, such as video games and movie rentals, that tend to keep people isolated from one another as reported in the “U.S. Census Bureau 2002 Economic Census: Arts, Entertainment and Recreation Report.”

– Greed: comparing total per capita income with the number of people living in poverty per capita as reported by the U.S. Census Bureau.

– Wrath: more statistics from the FBI, but for rape, assault and murder.

– Lust: the number of sexually transmitted diseases per capita from data collected by the U.S. Department of Health and Human Services.

– Pride: With no data that could be related, the researchers calculated pride as the aggregation of the other six sins.

Vought said the researchers found that the sins of gluttony and sloth were minor compared with greed, lust, envy, wrath and pride. The most gluttonous area, so to speak, encompassed southeastern Virginia and northeastern North Carolina. Pockets of gluttony also were found in central Appalachia and western Texas.

Slothful pursuits also were few and far between. The data showed sloth most common in southern Montana, south-central Pennsylvania, and Los Angeles and surrounding communities.

Greed was more widespread with large pockets in southern Florida, much of California, southern Nevada, western Arizona, and the Atlantic Coast from northern Virginia through southern New England. No surprise there. But, surprisingly, significant pockets of greed showed up in Seattle and western Washington, Denver and northern Colorado, the Houston and Dallas areas, an arc around the southern tip of Lake Michigan, and the area around the western basin of Lake Erie.

The least greedy areas proved to be the Southern states in an arc extending from Georgia through Arkansas and northeastward into West Virginia, north-central Texas, and the upper Midwest from Kansas to North Dakota.

When it came to envy, wrath and lust, data pointed to the South as being the most sinful area. A swath from western Appalachia to the upper Midwest proved to be the least sinful.

Pride, the aggregate of all the other sins, largely matched the patterns for envy, wrath and lust.

The concept of the seven deadly sins, also known as cardinal sins, can be traced back to the fourth-century writings of Roman-born Christian monk Evagrius Ponticus, who identified eight evil thoughts in which all sinful behavior was based. In order of increasing seriousness they were: gluttony, lust, avarice, sadness, anger, acedia (spiritual sloth), vainglory (vanity) and pride.

Late in the sixth century, Pope Gregory I – St. Gregory the Great – profuse writer that he was, revised the list, which became known as today’s seven deadly sins. St. Thomas Aquinas commented on the sins in “Summa Theologica” in the 13th century. Since then – from poet Dante Alighieri’s “The Divine Comedy” to contemporary depictions in television, film and video games – the sins of humanity have been the focus of writers, philosophers and theologians.

Vought and his fellow researchers have tossed around the idea of doing a similar analysis of the seven virtues, identified in the Catholic tradition as the cardinal virtues of prudence, justice, temperance and courage and the theological virtues of faith, hope and charity.

The trouble with such a study, Vought and his friends fear, is that it’s much more subjective and a bit more difficult to quantify all the good being done in American society. If such a study could be done with a high degree of accuracy, he said, it might show that the geographic areas that seem to be more sinful may be more virtuous as well.

In case you’re wondering about where Las Vegas – the so-called “Sin City” and America’s gambling capital where the researchers presented their findings to the Association of American Geographers – stacks up, the researchers said the city came across as pretty average in the study but only because it was compared with the rest of the country. Within the state of Nevada, it turned out to be the most sinful area with Carson City close behind.

Vought admitted that questions abound when it comes to mapping an abstract concept like sin. He acknowledged that the analysis, while based on official statistics, is not perfect.

“People will read into it what they will,” he said. “That’s all my colleagues and I really want.”