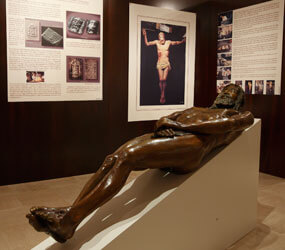 TURIN, Italy – A group from the Archdiocese of Baltimore led by Archbishop Edwin F. O’Brien joined a throng of pilgrims from around the world to see the Shroud of Turin during its 2010 exhibition.

The shroud, believed by many to be the burial cloth of Christ, is usually only displayed every quarter-century, but its 2025 viewing was moved up to this year by Pope Benedict XVI.

For about a month, the public had a chance to visit the Cathedral of St. John in Turin that houses the holy relic and spend a few minutes in prayer in front of the 14-foot-long cloth.

“The sense of awe and reverence was remarkable,” the archbishop said. “The closer the people got to the shroud, you could feel it in the air. It will remain in our mind for years to come. It had to make a deep impression.”

The presentation of the shroud began with a brief video slide show that highlighted areas of the cloth with captions in six languages so visitors would know what to look for on the shroud once they were in its presence.

The archbishop said he appreciated the non-commercial atmosphere and the visual aid, noting that it was well presented in a deeply spiritual way.

“When you see the bloodstains, the whiplash and the serene face of death, it certainly took a divine act to want to endure it for our sake and obedience to his Father,” Archbishop O’Brien said. “The pain and the suffering had to be immense, especially for one who is perfect. To have wanted to want to do that for love of us – it’s one thing to read about it, it’s another thing to see it in the relics of the Shroud.”

He recalled a quote from the year 2000 when Pope John Paul II viewed the Shroud and noted that for two millennia, artists have been trying to depict the face of Jesus, but that the face in the shroud is the closest we will come this side of heaven to seeing the face of Christ.

Noting that there is still no definitive answer, scientifically, as to whether this cloth was in fact the burial shroud mentioned in the Gospels, the archbishop said it is hard to deny. He also said, in either case, this icon represents what Christ went through during his Passion. “If someone insists this is not the real shroud, it’s still a cloth and material imprints that are very reflective of what we read in the Scriptures. That’s what a sacramental should be: it reminds us of Christ and the works of Christ.”

Monsignor Carl Cummings, pastor of St. Jane Frances de Chantal Parish in Pasadena, who also joined the pilgrimage, said it was “impressive” to be in the presence of the shroud, which he believes is probably the actual cloth the Lord was buried in.

“To be in the presence of something as holy as that was awe inspiring,” he said.

The monsignor has learned in reading about the shroud that there are differences between the blood and fluids that seep from wounds before and after death and also a difference between the fluids from the wounds from the crown of thorns and nail wounds and the wound from the Lord’s pierced side. Recent research shows those same differences have been found by forensic scientists in analysis of the bloodstains on the shroud.

He said the shroud is another way to bring to mind the great love the Lord had for us and his great obedience to the Father.

Noting that the pilgrimage would later visit Oberammergau, in Germany, for another major event that happens only rarely, he said, “It’s amazing we get to see the Shroud and the Passion Play for inspiring opportunities to deepen our faith.”

Christopher Gunty, associate publisher/editor, is leading with Archbishop O’Brien a pilgrimage sponsored by The Catholic Review to Italy, Austria and Germany.