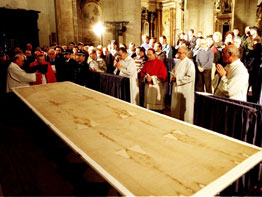 VATICAN CITY – The Shroud of Turin, revered by many as the burial cloth of Christ, will be displayed to the public for the first time in a decade in 2010.

Pope Benedict XVI announced during a June 2 audience with pilgrims from Turin that he had approved the shroud’s removal from its protective casket for display to the public in the spring of 2010.

He told the 7,000 pilgrims gathered in the Vatican’s Paul VI hall, “If the Lord grants me life and health, I, too, hope to come” see the shroud displayed.

According to tradition, the 14-foot by 4-foot linen cloth is the burial shroud of Jesus. The shroud has a full-length photonegative image of a man, front and back, bearing signs of wounds that correspond to the Gospel accounts of the torture Jesus endured in his passion and death.

The church has never officially ruled on the shroud’s authenticity, saying judgments about its age and origin belonged to scientific investigation. Scientists have debated its authenticity for decades, and studies have led to conflicting results.

The shroud lies protected behind bulletproof glass in a special chapel of Turin’s Cathedral of St. John the Baptist. The cloth lies flat, unseen inside a casket made of a special space-age alloy that is waterproof and fireproof and is hermetically sealed to keep out oxygen.

The shroud is removed only for very special spiritual occasions, and its removal for study or display to the public must be approved by the pope. The last time it was displayed to the public was in 2000 for the jubilee year.

Cardinal Severino Poletto of Turin, papal custodian of the Shroud of Turin, had requested the shroud be displayed in two years.

During the June 2 audience, the pope said he was happy to grant the archbishop’s wish.

Pope Benedict said it would be “a propitious occasion” for the faithful “to contemplate that mysterious face that silently speaks to the heart of humankind, inviting them to recognize the face of God.”

At the end of the Vatican audience, the spokesman for the shroud’s custodian, Monsignor Giuseppe Ghiberti, presented the pope with a life-size reproduction of the shroud.