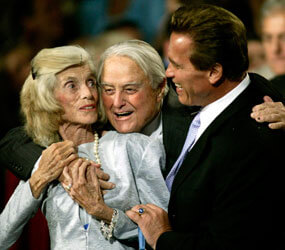 BETHESDA – R. Sargent Shriver, the founder and first director of the Peace Corps, a major figure in the war on poverty and the Democratic vice presidential nominee in 1972, died Jan. 18 in a Bethesda hospital at age 95.

Shriver, who was admitted to Suburban Hospital Jan. 16, had announced in 2003 that he suffered from Alzheimer’s disease.

A family representative said he died surrounded by those he loved, among them his five children – Robert, Maria, Tim, Mark and Anthony – -and several of his 19 grandchildren.

No details on funeral arrangements were available yet.

Shriver’s death came about a year and a half after the death of his wife, Eunice Kennedy Shriver, a founder of the Special Olympics and member of one of the most prominent American Catholic political families of the 20th century. She died Aug. 11, 2009. About two weeks later her last surviving brother, Sen. Edward “Ted” Kennedy, died. Sargent Shriver attended both funerals.

A native of Maryland’s Carroll County and lifelong Catholic who attended daily Mass and was known to carry a well-worn rosary with him, Shriver was “a man who personified the ideal of Catholic public service,” Supreme Knight Carl Anderson said in a Jan. 19 statement.

He noted that his death came just two days shy of the 50th anniversary of the inaugural address of his brother-in-law, President John F. Kennedy, who issued “a call to public service,” inviting “Americans to ask what they could do for their country.”

Anderson said like the late president, Shriver was a Knight of Columbus.

“We have always been proud to call him a brother Knight,” he said. “He embodied the values of Catholic social teaching: a love for the innate dignity of every human person, and a determination to help improve the lot of those who suffered. Sargent Shriver was a genuine Catholic gentleman, filled with faith, and a dedicated, loving husband and father to his five children.”

Shriver “came to embody the idea of public service” over his long career, President Barack Obama said in a statement issued shortly after his death.

He called Shriver “one of the brightest lights of the greatest generation.”

“His loss will be felt in all of the communities around the world that have been touched by Peace Corps volunteers over the past half century and all of the lives that have been made better by his efforts to address inequality and injustice here at home,” Obama said.

Robert Sargent Shriver Jr. was born Nov. 9, 1915, in Westminster. His family eventually settled in New York City. Shriver graduated from Yale University and its law school. During World War II, he served overseas as a U.S. Navy officer. He was awarded a Purple Heart for shrapnel wounds he received during the bombardment of Guadalcanal.

After the war, Shriver practiced law in New York, then worked for Newsweek. It was at that time that he came to know the Kennedy family. The patriarch, Joseph P. Kennedy Sr., hired Shriver to manage the Merchandise Mart in Chicago. After a seven-year courtship, Shriver and Eunice Kennedy were married in New York at St. Patrick’s Cathedral in May 1953, with Cardinal Francis Spellman presiding.

After President Kennedy’s assassination in 1963, Shriver accepted President Lyndon Johnson’s offer to administer the Office of Economic Opportunity, and he became known as the architect of the administration’s war on poverty. Shriver later accepted the post of ambassador to France, from 1968 to 1970.

In 1972, he ran for vice president on the 1972 ticket with George McGovern. Shriver replaced nominee Thomas Eagleton, who resigned from the ticket. In 1976, Shriver threw his hat into the presidential ring, but his candidacy was short-lived and he returned to private life and resumed his law career.

Shriver specialized in international law and foreign affairs with the Washington firm of Fried, Frank, Harris, Shriver & Jacobson. He retired as partner in 1986 but remained counsel to the firm. He later served as president of the Special Olympics and then had a stint as the organization’s chairman of the board.

Despite all of that, an AP story noted that above all he was “known first as an in-law”: brother-in-law of President Kennedy, Sen. Ted Kennedy and their brother, Robert F. Kennedy; and father-in-law of former California Gov. Arnold Schwarzenegger, who is married to daughter Maria.