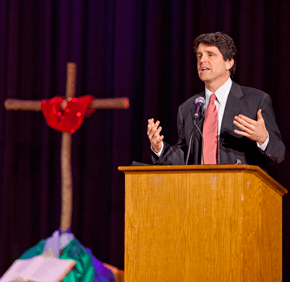 By Elizabeth Lowe
elowe@CatholicReview.org
Twitter: @ReviewLowe
Mark Kennedy Shriver, who hails from one of America’s most prominent political families, said he was daunted to speak about the Catholic Church in the modern world.
“I’m not a professor, I’m not a theologian, I’m not a high-powered politician,” said Shriver, a former delegate in the Maryland General Assembly. “What can I add on the topic of the church in the modern world?
Plenty, as Shriver, senior vice president of Save the Children’s U.S. Programs, gave the keynote address March 2 at the 34th annual Archdiocesan Social Ministry Convocation at The Seton Keough High School in Baltimore. The theme was “The Church in the Modern World: 50 Years after Vatican II.”
To view a slideshow, navigate the arrows below.
Shriver is the son of the late Sargent and Eunice Shriver, founders of the Peace Corps and Special Olympics, respectively, and the nephew of John F. Kennedy, the 35th president of the United States.
He spoke about the life and faith of his father, “a guy who went to Mass every day of his life – and I mean every day of his life. He was on his knees every day.”
Shriver recalled the day he asked his father – who battled Alzheimer’s disease for a decade – how it felt to be losing his mind.
The response – “I’m doing the best I can with what God’s given me” – resonated with his son.
After the 95-year-old died in January 2011, Shriver said waitresses, airport workers and the garbage man told him his father was “a good man.”
“His faith sustained him,” Shriver said. “Each of us can put our faith into action.”
His father “would have challenged us to do more for the billions of people who live every day on less than $1,” Shriver said.
Shriver told the nearly 300 people at the convocation, “I know what I feel in my gut is that what you’re doing is what the church is about.”
The convocation featured presentations and workshops on topics such as political asylum, workplace injustices, the death penalty and climate change.
Baltimore Archbishop William E. Lori led the opening and closing prayers during the morning prayer service.
“It is not easy work but it is beautiful work,” Archbishop Lori said.
Connie Flagg, a parishioner of St. Francis of Assisi in Baltimore and a teacher at Our Lady of Mount Carmel School in Essex, called social ministry “one of the most important things the church offers to the world.”
“In part, what keeps you going is the atmosphere,” said Flagg, who volunteers with St. Francis’ Christmas baskets. “The whole parish is alive with social ministry. It’s not challenging at St. Francis. It permeates the parish.”
Lala Mooney, a parishioner of St. John the Evangelist in Frederick who volunteers with an immigration advocacy group in Frederick, called social ministry “our obligation to help the poor and needy. God comes to me through other people. They do the work with me and they inspire me.”
During the convocation, awards were presented to those involved in social justice ministry.
Flagg was one of eight people who received service awards. Six people received advocacy awards.
Three special awards were given, including the John Hook Parish Award, presented to Peggy and Joe Cronyn, parishioners of St. Vincent de Paul in Baltimore; the Doris Johnson Community Award, presented to Sister of Notre Dame de Namur Barbara Ann English; and the International Peace and Justice Award, presented to Sarah Lutterodt, a parishioner of St. John the Evangelist in Columbia.
See also:
As one generation passes, social justice movement faces new challenges
Copyright (c) March 4, 2013 CatholicReview.org
PrevNext