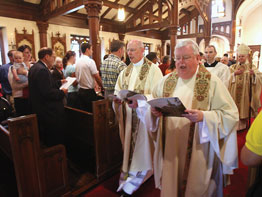 Parishes are the bedrocks of the Catholic community, Archbishop Edwin F. O’Brien said June 1 as he celebrated the 140th anniversary of The Shrine of the Sacred Heart, Mount Washington.

The Mass was a year in the making for the shrine, and the choir’s soaring music reverberated off of walls adorned by stunning stained glass windows. A framed blessing from Pope Benedict XVI hung in the vestibule.

“Parish life, of course, is the heartbeat of our church and certainly this parish has been the heartbeat, the sacred heartbeat, of this community,” Archbishop O’Brien told the packed church during his homily. “Today … we thank God, we thank the Sacred Heart of Jesus, for the many blessings he has put out to the light and the love that has flooded this Catholic community.”

The shrine was founded in scenic Mount Washington – then a summer retreat area – in 1867, two years after the conclusion of the Civil War.

The first church building – known then as The Shrine of the Sacred Heart of Jesus – was built across the street from the parish’s current Smith Avenue location. After 50 years, a new church led by architect E. Francis Baldwin was constructed. The intention was to replicate St. Giles Church in Buckinghamshire, England.

While the American landscape has been molded through numerous wars and social upheaval, the Shrine of the Sacred Heart has remained a constant on the hills of Baltimore, in the oldest archdiocese in the country.

Parishioners describe the church as a warm, inviting place where people of all backgrounds come together.

Monsignor Cramblitt said the parish has seen an influx of worshipers from the Philippines as local hospitals have developed outreach programs to that country. Nearly 100 new families are on the way, he said.

“He’s very good at putting a historical perspective around the readings and then linking it to a way that can be useful for us today,” said Pete Mathews, whose wife, Anne, is a fellow lifelong parishioner.

Martha Vitek-Pierorazio, principal of the parish’s school, said there is a strong drive to serve others at the school and parish.

During the Mass, Archbishop O’Brien bestowed the Archdiocesan Medal of Honor to Dien Vinh, the church’s manager of facilities, who will be retiring at the end of the month.

Mr. Vinh, a native of South Vietnam, came to the United States after spending seven years in a post-war concentration camp.

Monsignor Cramblitt said Mr. Vinh, a member of Our Lady of La Vang, Essex, was “a pastor’s dream.”

A visibly moved Mr. Vinh thanked the American people and parishioners for their love.

“I am grateful to Archbishop O’Brien for being here to lend me this medal,” Mr. Vinh said. “I will keep it preciously the rest of my life.”