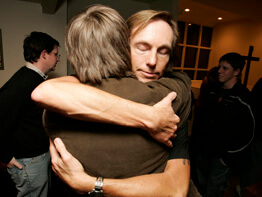 In a phone interview just hours after the shootings, Teresa Volante, Catholic campus minister at Virginia Tech, said she had sent out an electronic notice that the Newman Center chapel was open for anyone who wanted to stop in and pray.

But she said the center, located just off the campus, was rather quiet at that time since the dormitories on campus were still locked down and the off-campus students had been instructed to stay away.

“I’m here for students to talk to,” she said.

Later in the afternoon Debbie McClintock, a volunteer who came in to help, told Catholic News Service that people at the center were calm and were focused on helping anyone who came in. A prayer service was held at 7 p.m. at the center.

At St. Mary’s Parish, the only Catholic parish in Blacksburg, the receptionist said the pastor, Father James Arsenault, had spent more than three hours at the hospital with those who were wounded before heading over to the university to help there.

She said the church would be open all afternoon, with the Blessed Sacrament exposed for adoration, followed by a special Mass in the evening.

Father Rob Cole from Our Lady of Nazareth Parish in Roanoke came in to celebrate the Mass, since Father Arsenault was still busy ministering to victims and their families.

The university president, Charles Steger, called the shootings “a tragedy that we consider of monumental proportions.”

Bishop DiLorenzo, who celebrated a noon Mass for the victims April 17 at the cathedral in Richmond, said his heart goes out to the parents and family members of the dead students.

“At this time one cannot help but think of the endless years of commitment, of love and care these parents have invested in their children and then to have it all cut down by a bullet is tremendously sad,” he said.

“The tragedy really hit home with me,” he said, because he learned of it at a chancery luncheon that included two women who have children studying at Virginia Tech. He said that fortunately their children were not harmed.

Emily Flach, a freshman business major who lives on campus, said, “People are just really shocked. It’s unbelievable that something like this happened.”
She told CNS at 3 p.m. that many students had not eaten all day because of the lockdown and a remaining uncertainty about whether it was safe to go out.

She said her dormitory is about three minutes’ walk from West Ambler Johnston, the dormitory where two students were killed in the first shooting about 7:15 a.m.

Two hours later the gunman, identified as Cho Seung-Hui, a 23-year-old senior from South Korea, attacked students attending classes in Norris Hall, an engineering building, shooting more than 40 people before killing himself as police were closing in.

The initial death toll was placed at 22, including Cho, but as the day wore on the number of confirmed dead rose to 33.

When Flach learned there would be a prayer service at the Newman Center that evening, she said she thought that was a good idea. “I think the best thing we can do is come together … and pray for everyone,” she said.
Anne Greenwood, a second-year graduate student in history, said she was in a conference room in the Major Williams building, when Cho began shooting people at nearby Norris Hall.

She said the first notice the group she was with had about the shootings was when they began receiving campus e-mail around 9:30 a.m. In quick succession, messages from the administration said there had been a shooting in a residence hall, then warned everyone that a gunman was still on campus and that they should stay inside.

Greenwood said the people she was with were unsure whether they were hearing gunshots because of extreme high winds at the time.

“To be quite honest, it was scary as hell,” she said.

Speaking with CNS a couple of hours after students were allowed to leave the campus, Greenwood said the impact of the gunman’s toll was still hitting her.

“I’m having a hard time dealing with the fact that so many died,” she said.
The April 16 shooting was the deadliest on-campus attack in U.S. history. Before that the worst was at the University of Texas in Austin in 1966, when a gunman climbed a clock tower and killed 16 people before police killed him.

Last year on the first day of classes for the 2006-07 school year at Virginia Tech, an escaped inmate was captured near the campus after he allegedly shot and killed a sheriff’s deputy and a security guard. While the search for the inmate was on, classes were canceled, the Virginia Tech campus was closed and students and staff were ordered to stay indoors.

Virginia Tech has about 26,000 students. Volante said about 800 to 1,000 of the students regularly attend Sunday Mass at the Newman Center or are involved in activities there.

Contributing to this story were Jerry Filteau and Patricia Zapor.