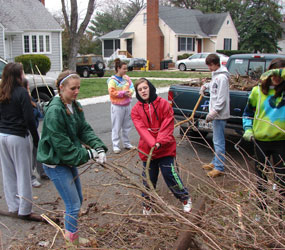 For one Anne Arundel County woman, it was a much-anticipated annual rite of passage.

Every spring, the mother of five looked forward to planting a wide assortment of flowers in her front yard and up to 40 tomato plants out back. As the flowers bloomed, she carefully snipped blossoms to make arrangements for her home.

After surviving cancer for 27 years – believed to be a record at The Johns Hopkins Hospital in Baltimore where she is being treated, the woman just couldn’t keep up with her outdoor avocation. Her once well-tended lawns succumbed to underbrush, dead leaves and old branches.

Teens from St. John the Evangelist in Severna Park helped reclaim the property’s former glory by devoting two of their April Saturdays to sprucing it up.

Wielding handsaws and axes, the team of 16 volunteers cleared the brush, chopped dead tree branches, raked leaves and carted away the debris. They lovingly lowered flowers into the ground – brightening the home and the spirits of its owner.

Surveying the troupe of glove-wearing youngsters a few hours into their first day on the job April 2, the cancer survivor stood on her porch and smiled ever so faintly.

“It’s nice what they are doing,” said the 70-year-old woman, who asked that her name not be used. “I can’t do the stuff I used to do.”

The teens were part of a confirmation class at St. John. The project will help fulfill 10 hours of service required in preparation for the sacrament, but it’s much more than that.

“It makes you feel good to know you are helping other people,” said Mackenzie Coyle, 13-year-old eighth-grader at St. John School in Severna Park.

Working on the project changed the way Mackenzie perceives her faith, she said.

“It makes me feel way more mature than I was before I started confirmation,” she explained.

Andrew Keith, a 13-year-old eighth-grader at Severna Park Middle School, said it is important to reach out to others. It’s what his faith demands, he said.

“It’s nice to help other people,” he said.

Penny Tilghman, a mother of one of the confirmation students and one of the project organizers, noted that the homeowner has given back to her community all her life. She was active in supporting the Girl Scouts, sang at senior centers and volunteered in other ways. The woman still sings in her church choir.

“She’s been out there in her community and has worked really hard,” Tilghman said. “Now it’s time for us to give back to her and help her.”