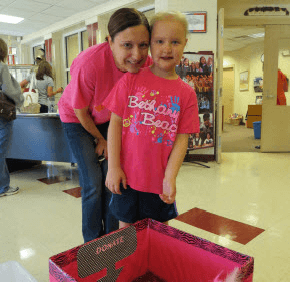 October is Respect Life Month, and lessons about the value of life can be found throughout the Archdiocese of Baltimore.

In Gambrills, a 7-year-old second-grader at School of the Incarnation is touching hearts and lives with a personal crusade she has taken on.

Alyssa Klebasko, who has been battling leukemia, is collecting child-friendly character Band-Aids for the Band-Aid book at the Johns Hopkins Pediatric Oncology Center.

In a recent video promoting her project, Alyssa explained, “When I go to Hopkins for my treatments, it’s never fun, but the one bright spot is the special Band-Aid I get to pick from the Band-Aid Book after my treatment.”

After noticing the book is often low on Band-Aids, Alyssa decided to collect Band-Aids at her school to fill the book.

For two days in September, which is National Pediatric Cancer Awareness Month, School of the Incarnation students participated in dress-down days, with each child contributing a box of Band-Aids. The school has collected Band-Aids featuring Disney princesses, Muppets, Mickey Mouse, race cars, Winnie-the-Pooh and more. Students wore gold (the color designated for Pediatric Cancer Awareness) or orange (the color for Leukemia awareness).