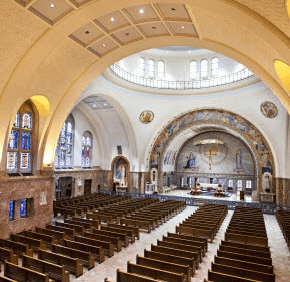 UPDATED Jan. 29, 2013 2 p.m. – Archbishop William E. Lori designated seven churches in the Archdiocese of Baltimore as sites where Catholics can receive a plenary indulgence for the temporal punishment of sins during the Year of Faith, which ends Nov. 24.

In addition to visiting the site, a person much be truly penitent, go to confession, receive the Eucharist, and pray for the intentions of the pope.

An indulgence is a remission of the temporal punishment a person is due for sins that have been forgiven. Archbishop Lori said seeking the Year of Faith indulgence is “an opportunity to be reminded of this further expression of God’s mercy, this wish of the Lord’s merciful heart not only to forgive our sins, but help us repair the damage that sin does to us.”

The Basilica of the National Shrine of the Assumption of the Blessed Virgin Mary. Founded as the first metropolitan cathedral in the United States, the Baltimore Basilica is considered the mother church of Roman Catholicism in the United States. America’s first Catholic bishop John Carroll laid its cornerstone in 1806. Cathedral and Mulberry Streets, Baltimore.

Shrine of St. Alphonsus. Established in 1845, the Shrine of St. Alphonsus calls itself the church “where saints prayed.” Its rectory once served as provincial headquarters for the Congregation of the Most Holy Redeemer, also known as the Redemptorist fathers and brothers. The church was pastored by two of the order’s holy members: St. John Neumann and Blessed Francis Xavier Seelos. 114 W. Saratoga St., Baltimore.

Basilica of the National Shrine of St. Elizabeth Ann Seton. The first native-born American saint, Elizabeth Ann Seton is entombed in the basilica that is adjacent to the buildings and grounds where she lived and worked with other members of the order she founded, the Sisters of Charity of St. Joseph. A wife, widow, mother and religious sister, St. Elizabeth Ann Seton has a wide appeal for Catholics, said the shrine’s director Rob Judge. 339 S. Seton Ave., Emmitsburg.

St. Mary. St. Mary has been served by the Redemptorists since its founding in 1853. St. John Neumann laid its cornerstone, and Blessed Francis Xavier Seelos served as its pastor. Its property includes the childhood home of Charles Carroll of Carrollton, the only Catholic signer of the Declaration of Independence and cousin to John Carroll, first archbishop of Baltimore. 109 Duke of Gloucester St., Annapolis.

St. Ignatius. The oldest continuously-active parish in the archdiocese, St. Ignatius was established in 1792 and played a significant role in establishing six other Harford County parishes. Adjacent to the main church, the historic church attracts visitors because of its warmth and history, said Monsignor James M. Barker, St. Ignatius’ pastor. “There’s a real rootedness here and a history of people who struggled for the faith, and to bring the faith to this region,” he said. 533 E. Jarrettsville Road, Hickory.