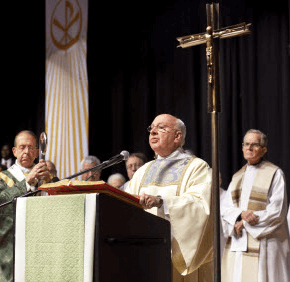 By Maria Wiering
mwiering@CatholicReview.org
Twitter: @ReviewWiering
Deacon Charles H. Hiebler spent his college years in seminary – first at St. Charles College Seminary in Catonsville, then at Mount St. Mary’s Seminary in Emmitsburg. He decided to leave after his first year of theology.
“For me personally, I felt I could do more for people without a Roman collar around my neck,” he said.
Looking back on his career, he thinks he was right – although he did receive Holy Orders to join the diaconate in 1984.
He worked for 20 years for the Boy Scouts of America, spent several years in parish work, and is now retiring after more than a decade assisting an auxiliary bishop – first Bishop W. Francis Malooly, now bishop of Wilmington, Del., and then Bishop Mitchell T. Rozanski, vicar of the Seton Vicariate.
Deacon Hiebler’s retirement from the position as assistant pastoral planner to the Seton Vicar was effective July 1. The retirement does not affect his diaconate ministry at the Cathedral of Mary Our Queen in Homeland.
His work for the Seton Vicariate was something he thoroughly enjoyed, but he wants to spend more time with family and travel while in good health, he said.
Members of Immaculate Heart of Mary in Baynesville, Deacon Hiebler, 69, and his wife, Joyce, have three children and seven grandchildren.
When Deacon Hiebler joined the Catholic Center staff in 2002, there were three vicariates, or geographical subdivisions, within the archdiocese: Eastern, Western and Urban. They were reorganized in 2008, becoming the St. John Neumann Vicariate, which includes Baltimore City, Baltimore County and Harford County; and the St. Elizabeth Ann Seton Vicariate, which includes, from west to east, Garrett, Allegany, Washington, Frederick, Carroll, Howard and Anne Arundel Counties.
With the transition, Deacon Hiebler, who worked in the Western Vicariate, assumed duties for the Seton Vicariate, tending to parishes from the mountains to the Chesapeake Bay.
“It’s been a real pleasure to work with the many lay people in the parishes these many years,” Deacon Hiebler said. “It’s been a real joy.”
During his tenure, he’s watched Frederick, Howard and Washington Counties grow with an influx of Washington, D.C., commuters, creating new ministerial challenges. With so much time spent driving between home and work, many commuters do not have time for parish activities or volunteerism, requiring new models for religious education and events, Deacon Hiebler said.
“It’s trying to see how we can adapt to this lifestyle that people are living under,” he said. “We are called to serve them, meet them where they are and help them to grow.”
Allegany and Garrett Counties face the opposite challenge. Declining populations and resources in some areas have compelled parishes to share ministries, staff members and buildings. In 2011, five churches in the Cumberland area merged into a single parish, Our Lady of the Mountains. Deacon Hiebler was instrumental in the planning process.
Deacon Hiebler thinks other parishes can learn from the merger’s success. The Archdiocese of Baltimore is expected to initiate a comprehensive parish planning process within the next few years.
“It’s all about the mission of the church, which is evangelization. How can we best fulfill the mission and ministry of Christ to which we are called? It takes all of us working together to make that happen,” he said.
Sitting in his office surrounded by boxes packed with books, folders and awards, Deacon Hiebler said he never eagerly anticipated retirement like some people do, and he’s satisfied with his career. He plans to continue volunteering with the Boy Scouts and expects to assume new responsibilities at the cathedral.
Bishop Rozanski hopes to fill Deacon Hiebler’s position during the summer, he said.
“I know that to find someone with Charlie’s experience and gifts is not going to be an easy task,” he said. “Charlie has wholeheartedly put himself into his work.”
PrevNext