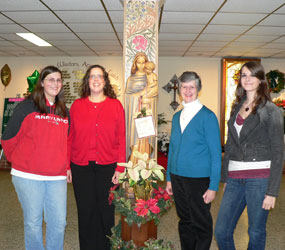 Shannon Flynn doesn’t just follow in legacies. She creates them.

When she graduates from Baltimore’s Seton Keough High School May 26 with a 4.0 grade point average, Flynn will be remembered as a standout member of the chorus and theater groups.

She earned her Girl Scout Gold Award after she held a suicide prevention awareness concert at Seton Keough last year. Flynn is a member of the National Honor Society and the Music Honor Society, as well as a celebrated artist.

The parishioner of St. Agnes in Catonsville knows none of this would have been possible without the sturdy love and guidance of her mother, Linda Lohrfink, and grandmother, Arlene Lohrfink.

Shannon could have easily been just another legacy name at Seton Keough, a school formed in 1988 out of a merger between Seton High School and Keough High School. Arlene Lohrfink graduated from Seton in 1957, while Linda Lohrfink is a member of Keough’s class of 1984.

“Just to see my granddaughters come out of school, smiling and happy, makes my heart sing,” Arlene Lohrfink said. “It’s the thing I felt when I walked out of school and when my daughter walked out as well.”

Prior to moving to Catonsville from New Jersey at the age of 14, Arlene had never been to a Catholic school. Seton was a transformative experience.

“I just loved it,” Arlene said. “It was just that spirit of coming together, to help and learn and to be true friends to each other.”

A stay-at-home mother, Arlene spent much of her adult life volunteering at her four children’s schools, including St. Mark’s in Catonsville, Keough, Calvert Hall College High School in Towson and Mount St. Joseph in Irvington. To this day, she still helps with carpools.

Arlene, like her mother before her, was a Girl Scout leader. Linda has followed suit.

Arlene provided a motherly example, one that Linda tries to match with her own daughters.

Linda, a single mother who works as a medical technician, has largely raised her daughters on her own.

Linda switched to night shifts so that she could make more money for the family.

“She works so hard to keep me and my sister here in school,” Shannon said. “I thank her a lot. She teaches us to appreciate what we have. This is a privilege, not a right. She works hard for everything she gets. That’s what I want in life.”

Linda learned her work ethic by watching her parents, including father Robert.

Shannon is doing just that. At Seton Keough, she has flourished in the classroom, with mostly honors and advanced placement courses. On stage, she has starred in stagings of Willy Wonka and the Chocolate Factory, Alice in Wonderland and The Sound of Music.

“I’m kind of a theater junkie,” she said. “I don’t think I’ve ever had stage fright in anything.”

Watching Shannon sing in the chorus brings joy to Linda and Arlene.

“It makes me very proud,” Linda said. “She’s very confident up there. She has a beautiful voice.”

Shannon, who works at a restaurant at Charlestown Retirement Living Community in Catonsville, will attend James Madison University in Virginia this fall and study interior design.

The college decision was one that came with a lot of prayer. Faith has been the connecting tissue for the Lohrfink women.

“I think the faith has kept us grounded,” Linda said. “We’ve had tough times, but we would have gotten through it without the faith.”

Shannon knows that wherever she goes in life, she will have the love of her mother and grandmother.

“They’re both really strong women,” Shannon said. “When I see what my mother or grandmother has done, that shapes how I am with my friends. They’ve always been there for me.”

Arlene looks at her granddaughter and knows she carries the legacy of Seton, Keough and now the school that has bonded the two forever.

“She has worked so hard to get where she is,” Arlene said. “There is a lot of pride where I look at her.”