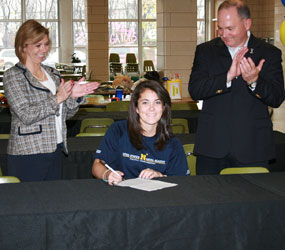 That’s why she is taking all AP classes, playing two sports and serving as class treasurer in her senior year at the Baltimore school.

It’s why, as a freshman, she ran for class president without knowing anyone – and won.

And it’s why this fall, the St. Augustine, Elkridge, parishioner will attend the U.S. Naval Academy in her quest to serve her country by flying jets.

A self-proclaimed military brat, Sam and her younger brother, Michael, grew up immersed in the military culture – surrounded by men and women commanding respect while dressed in uniform, and often touring military bases and playing amongst U.S. Army tanks.

Military service is vast in her extended family as well, with grandparents on both sides serving in either the U.S. Air Force or the U.S. Army, and other relatives engaged in service as well.

“Even when my dad was deployed, we were sad, but at the same time, we were like, ‘He’s doing something great for other people, ‘“ Sam said. “I think it’s the way I was brought up to look at it.”

Sam wasn’t sure where she wanted to fly jets, and applied to and was accepted at both the U.S. Air Force Academy in Colorado and the Naval Academy.

The application process was a challenge in itself, requiring demonstrating her physical stamina, writing essays and acquiring letters of recommendation from teachers, senators and even the vice-president of the United States.

Because both of her parents had lengthy terms of service in the military, Sam said she was selected for a presidential nomination.

Choosing where to attend school was difficult. On her own, she applied to attend a one-week summer seminar at each school.

“I remember one morning waking up for PT (physical training) at the Naval Academy, and it’s on their sports field, and it’s overlooking the water, and you can see the sun rising,” she said. “I was like, ‘This is really pretty. I don’t mind doing this if I get to see this every day.’”

In addition to her leadership roles, and sports involvement, Sam’s community service will also help in her future endeavors. A cousin with Down syndrome inspired Sam to become involved locally with the Special Olympics.

She also continues to volunteer as a counselor and planner with the Hugh O’Brien Youth Leadership Seminar, which she attended as a sophomore.

She’s grateful, she said, for opportunities such as that, and serving on student and class councils, which were provided to her through Seton Keough.

Sam’s faith will also play a role in her military education and service.

“They have a beautiful chapel at the academy, and I’m looking forward to going to Mass every Sunday,” she said. “In the military, faith is important. If I get deployed, staying true to my faith will be important during that time. It will also be important over plebe summer, because that’s the hardest time in the academy. Basically, they try to break you down mentally and physically and then build you back up.”