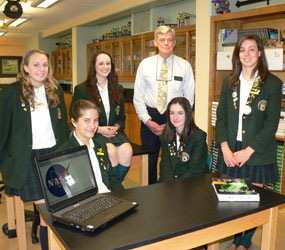 The last thing Emily Montoya, Sarah Baer, Sara Caton, Jessica Sweitzer and Rebecca Stevick are going to do as students of Seton Keough won’t be tossing their graduation caps in the air, as they did May 26.

It will be studying alongside NASA scientists in the Lunar Extreme Workshop at Goddard Space Flight Center in Prince George’s County’s Greenbelt June 20-24.

Selected as part of NASA’s Dynamic Response of the Environment at the Moon (DREAM) project, the five students took part in a series of webinar sessions with the NASA scientists from their Baltimore classrooms during the last few months.

Once at Goddard this summer, they will help measure and model a surprising collection of phenomena occurring at and above the lunar surface. The phenomena are caused by solar wind, high-energy particles and electromagnetic waves on the moon.

Seton Keough joined Eleanor Roosevelt High School in Prince George’s County as the only other school in the Maryland, Washington, Virginia area to be selected for the program.

“Not many people get the opportunity to work with NASA scientists to learn about the moon and everything that is involved with it,” senior Baer said. “It was interesting to see what was in store for us.”

On May 20, the five students were huddled in front of a computer talking to NASA’s Bill Farrell, head of the DREAM team, about the moon. A screen at the front of the classroom showed Farrell alongside images of several documents he was working with at the time. The girls followed along in the mini-lecture.

The students have prepared for the project with Seton Keough science and engineering teacher Bill Mason during the last several months. Mason and principal Angela Calamari proposed the idea to the students.

Stevick confessed: “We all kind of applied not knowing that we’d be picked.”

For Caton, who hopes to study chemical engineering at the University of Maryland College Park this fall, it was an opportunity she could not pass up. Stevick will also go to school there and study bioengineering.

The students worked individually on essays and hoped for the best. When they were picked, Mason gathered them altogether. They were elated and shocked.

Calamari is completing her first year at the school. She said the DREAM team has been an inspiration.

“They’ve had to go above and beyond,” she said.

Calamari can’t help but think about her formative years. She sees a changing landscape for women and believes the Seton Keough graduates will be trailblazers.

“This was out of the realm of possibility,” Calamari said of her own background. “When we were younger, we were trained to be teachers and nurses. Their knowledge of science is leaps and bounds above my own. I am amazed by them.”

The Seton Keough graduates will relish their extended time together this summer. Although they will no longer have to wear the school uniform, they will carry their sisterhood with them for the rest of their days. They can’t help but think back to their first days at Seton Keough.

“When you walk through those doors, you’re with family,” Sweitzer said.

Montoya’s mother is a longtime teacher at Seton Keough. Saying goodbye during the last few weeks to teachers and friends has been tough.

“It’s my home away from home,” she said. “Your four years here change you forever.”