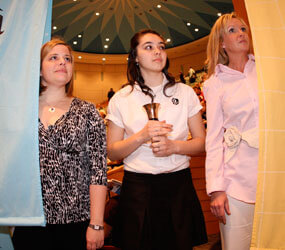 MINNEAPOLIS – The annual convention of the National Catholic Educational Association April 6-8 in Minneapolis featured keynote speakers and workshops tailored to address different Catholic school interests including marketing, administration and religious education for the 8,500 Catholic educators, administrators and leaders in attendance.

Mary Bray, principal at St. Joseph School in Prescott, Wis., said that she attended the convention for the opportunity to be in solidarity with other Catholic educators and to be on “the cutting edge” of education, both in technology and curriculum.

St. Joseph, which has kindergarten through sixth grade, has 177 students and seven teachers. All the teachers attended, Bray said.

“It’s a great place for our teachers to hear national speakers and gain access to info they don’t get in our tiny school,” she told The Catholic Spirit, newspaper of the Archdiocese of St. Paul and Minneapolis.

Derrick Gordon, a physical education instructor at St. Ignatius Loyola School in New York, said that he hopes to share what he learned at the convention with his colleagues and students especially on the topic of bullying and harassment which was addressed by several presenters during the convention.

Gordon does not see bullying as a current issue in his 500-plus-student school, but by learning more about it, he believes he could easily recognize and address its signs before it grew into a problem, he said.

Dominican Sister Joan Sorge, from St. Agnes in Springfield, Ill., attended the convention to receive a distinguished principal award during an April 6 banquet. She said attending the convention gives her a feeling of unity in faith and work among educators.

“There’s a spirit here that’s positive, and amidst some of the difficulties of the church, it’s a light that shows in the darkness. That light will penetrate the spirit and help us carry that forward,” she said.

Archdiocesan superintendent of schools Marty Frauenheim welcomed the crowd at the Minneapolis Convention Center urging them to allow the three-day convention “to rekindle in you great pride as an American Catholic and to reaffirm for you your own ministry.”

NCEA president Karen Ristau is no stranger to the Twin Cities. Earlier in her career she was a faculty member and director and chair of programs in education leadership at the University of St. Thomas, where she established, along with another colleague, the university’s first doctoral program in educational leadership.

She joked with educators that people who came to Minnesota needed a special spirit to survive. She added that the “special spirit of NCEA is the Holy Spirit” and said the association was “created to do big things, far beyond surviving.”

Ristau said one of those big things on her agenda is an issue in the news recently – bullying in schools.

Jesuit Father James Martin, one of the keynote speakers, brought down the house in his general session presentation, “Laughing with the Saints: Joy, Humor and Laughter in the Spiritual Life.”

He told the convention participants that the church has plenty of funny expressions. “We install an archbishop – install, like a dishwasher or refrigerator.”

He also noted that when Archbishop Timothy M. Dolan was installed as the archbishop of New York, a reporter asked him, “What do you condemn?” The archbishop, showing his own sense of humor, replied: “Instant mashed potatoes and light beer.”

During several convention workshops audiences filled every seat, sat down on the floor and stood in the doorways. Convention attendees hailed from across the United States and from the Netherlands, Nicaragua, New Zealand and Japan, among other countries.

Contributing to this story was Bob Zyskowski.