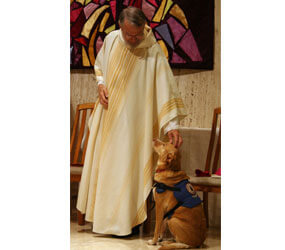 His life depends on it, and so does his ministry.

“She has given me a way to remain an active parish priest, and that has meant everything to me,” said Father Groner, pastor of St. Robert Bellarmine in St. Robert and St. Jude in Richland.

The priest has Type I diabetes, which occasionally causes his blood-sugar level to fall to a dangerous level. Without treatment, that could lead to seizures and other health emergencies.

The human body gives off a slightly different smell when a person’s blood sugar is low. People don’t notice the change. But Lilly, trained since birth to be Father Groner’s service dog, knows the difference immediately.

The yellow Labrador-Brittany mix also is tuned in to changes in Father Groner’s behavior that might suggest low blood sugar.

She licks his face to tell him he needs to take a sugar pill so his brain gets the glucose it needs to function properly. Otherwise, he could black out.

“They would probably find me dead in a ditch with my car wrapped around me,” he told The Catholic Missourian, Jefferson City’s diocesan newspaper. “That’s the difference Lilly makes.”

The priest did black out on several occasions before he got Lilly and his housekeeper had to come to his rescue. “It was getting to where I could no longer function in active ministry,” the priest said, but he didn’t want to give up the priesthood or his role as pastor.

Michele Reinkemeyer, founder and executive director of Heaven Scent Paws in St. Elizabeth, helped Father Groner train Lilly, using a program she and her husband had developed to help their own children.

Their training techniques turned out to be an answer to Father Groner’s prayers, too.

The priest introduced the dog to his parishioners when she was just a puppy.

“I said, ‘She is not trained yet, but I want you all to meet my service dog,’” he said. “So I walked up the aisle, and she just followed me all the way up to the altar. I put her in my palm and held her up and showed her to everybody.

“That was her first time in church, and she’s been in church with me ever since then,” he said.

Under federal and state law, Father Groner may bring his service dog with him to any public setting.

He said children like to watch her at Mass because he thinks they feel a closeness to her.

Similarly, some of the men on a recent Residents Encounter Christ weekend at the Algoa Correctional Center in Jefferson City were drawn to Father Groner’s preaching and counseling after first being drawn to Lilly.

“I do think she helped them feel more comfortable around me,” he said. “Besides, some of these guys haven’t seen a dog up close in many, many years. And dogs are very loving. They accept you unconditionally. That’s one of their great qualities.”

Lilly is now as familiar a sight in St. Robert Bellarmine and St. Jude churches as the cantors and sacristans. At the chrism Mass each year, she joins Father Groner and all the other concelebrating priests in the sanctuary of the Cathedral of St. Joseph in Jefferson City.

She’s used to the crowds and commotion and knows how to keep a low profile.

“She’s grown up around the church,” said Father Groner. “She has no trouble with sitting off to the side until Mass is over. People are used to seeing her. They know she’s going to be on the sanctuary and doesn’t mess anything up. She’s very well-behaved and doesn’t cause any problems.

More information about Heaven Scent Paws can be found on the Internet at www.heavenscentpaws.com.