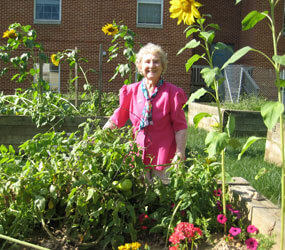 For those living independently in continuing care retirement communities, making the move to assisted living may, at first glance, have a negative connotation. Yet, often the transition can dramatically improve the quality of life for an individual.

“Moving from independent living to assisted living is a decision that ideally is made by the resident and her family, with input from the medical director,” says Ginny Gullett-Tawes, director of marketing and development at Pickersgill Retirement Community in Towson. “Usually people make this move because they are no longer able to safely live on their own.”

“People may start to gradually decline and if they are living alone may forget to take their medication properly,” he says. “In assisted living there is a nurse who will monitor the medication.”

According to Maryland law there are three levels of assisted living. Cost will vary according to the services required.

“At Pickersgill, a Level 1 room or suite will range from $2,445 to $3,630 (per month) depending on the square footage,” says Gullett-Tawes. “The second level ranges in price from $3,105 to $3,765. We do not have Level 3 care as we believe that if residents need that third level they can be better served in our nursing facility.”

Suites include a private bath, living area and one bedroom, with a kitchenette.

“It looks just like an apartment, but because the kitchenette has no stove, it cannot be called an apartment,” says Gullet-Tawes.”

She adds that in addition to nursing care, her community has a partnership with Gilchrist Hospice Care for on-site hospice services.

While one who needs assistance could request home support for a couple of hours a day, Rosewag points out that could be more expensive than making the move to assisted living.

“The more home support one needs, the more expensive it becomes,” he notes, adding that retirement communities, such as Oak Crest Village and other properties, are part of an “industry of necessity.”

“And in assisted living,” he adds, “there are more opportunities to live a more healthy, vibrant life than living alone.”

In an assisted living environment, residents typically will receive three meals a day (those living independently have one meal a day included in their monthly fee). They may also have their laundry done and receive assistance with housekeeping, eating, dressing, bathing and using the toilet. Depending on their care level, they may also have someone on standby while they are bathing or to remind them when it is time to go to the dining room for a meal.

Yet, they are not deprived of the activities that were available while they were living independently. Indeed, without the responsibility of cooking and cleaning, residents have more time to enjoy the myriad activities available.

“The activities in assisted living are pretty much the same as for those living independently,” says Gullett-Tawes. “We have educational classes, lectures, exercise groups, as well as classic and first-run movies, and singing groups.”

Pickersgill residents have the option of taking advantage of field trips, such as visits to Ladew Topiary Gardens, and there is scheduled transportation to shopping and banking twice a week.

“The purpose of assisted living is to keep people as independent for as long as possible,” says Gullet-Tawes. “If something like doing the laundry is difficult, taking that burden off of a resident improves his quality of life.

“And if someone is no longer driving in the outside community, he may become isolated, whereas in assisted living, there is plenty of socializing.”

Rosewag notes that he frequently hears from independent residents who say, “Oh, I never want to go to assisted living.”

“When I ask them why they chose Oak Crest or Charlestown,” he says, “they say because it is a continuing care retirement community and it offers assisted living as well as nursing care.”

He also hears from the children of those who have made the move.

He says “They’ll tell me, ‘You have added so many years to my mother’s life … I wish we had done this sooner.’ ”