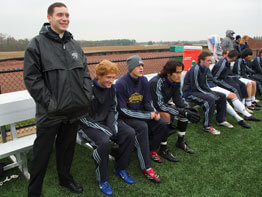 Coaches may be charged with making sure athletes perform at their very best at Mount St. Mary’s University in Emmitsburg, but it’s seminarians who help nurture their spiritual well-being.

For several years, men studying to become priests at Mount St. Mary’s Seminary have served as volunteer sports chaplains for every team at the university.

They pray with players and coaches, attend practices and offer support whenever it’s needed. It’s a partnership that benefits future priests and future college graduates alike, according to those involved in the program.

“They try to relate to us as college students,” said Colin Stuver, a 21-year-old senior and left-handed pitcher on the baseball team.

“They’re not too overbearing or easygoing,” he explained. “They’re right in the middle. They’re very well respected.”

Last year, when the brother of a fellow player died, it was the sports chaplains who helped console the baseball team, Mr. Stuver said.

The chaplains have become a familiar presence at practice, Mr. Stuver said, and are often seen tossing a football with the players and just holding conversations.

Mr. Stuver said it was impressive to see his fellow teammates kneel in prayer with their chaplain before every game. He joked that team members felt lost on those few days when the chaplain couldn’t be there to lead prayer.

“Praying before the games helps collect our senses and realize why we’re playing,” the northern Virginian said.

Deacon Tim Naples, a 26-year-old seminarian and transitional deacon who will be ordained a priest for the Diocese of Burlington, Vt., this year, has served more than two years as chaplain of the track and field team.

To participate in the chaplaincy, he had to show an interest in athletics, have a good academic record and get approval from seminary leaders.

“I have a hard time keeping up with them,” he said with a laugh.

The former high school soccer and basketball player said sports chaplaincy is a ministry of presence. He often answers questions about theology or the life of a priest. He has held several spaghetti dinners for the entire team that were well attended.

“I’ve learned a lot from them about the virtues of fortitude and endurance,” Rev. Mr. Naples said.

Being a sports chaplain has helped him learn how to minister as clergyman, he said. When it’s appropriate, the chaplain has gently encouraged team members to go to confession or attend Mass.

The deacon believes the presence of chaplains in clerics helps promote good sportsmanship.

“If we can influence the athletes to be a little more virtuous in small ways, that’s good,” he said. “I’ve heard from other chaplains in the past that the students are definitely more conscious of their language when we’re around.”

The chaplains usually serve for more than one season – giving them the chance to get to know team members over a long period of time, according to Father Leo Patalinghug, director of pastoral field education and coordinator of the chaplaincy program.

“It helps the students in the university better know the seminarians,” Father Patalinghug said. “The chaplains encourage the athletes to use their God-given talents well.”