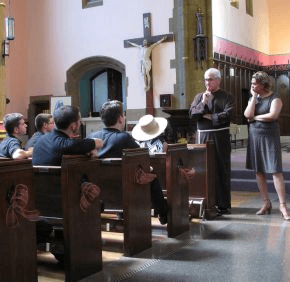 From the front of the bus, Father James Sorra, director of vocations for the Archdiocese of Baltimore, addressed the 27 future priests on board.

“Guys, this spot here is what you saw on CNN every night,” Father Sorra said as the bus approached the intersection of Pennsylvania and West North avenues in Baltimore.

It was the corner where, on the night of April 27, a CVS pharmacy was burned, stores were looted and property was destroyed, as residents’ frustrations boiled over in the wake of the death of Freddie Gray Jr. The 25-year-old had succumbed to injuries sustained in police custody.

More than three months later, the bus made its way through the intersection July 31, as the archdiocese’s seminarians made their 2015 pilgrimage, informally dubbed “Seminarians in the City.”

Stopping at points particularly representative of the city’s challenges – including St. Peter Claver in Baltimore’s Sandtown neighborhood, St. Ambrose in Park Heights, and Catholic Charities’ Weinberg Housing and Resource Center at 620 Fallsway – this most recent pilgrimage marked a departure from previous years.

“In the past, we focused on historical sites in the archdiocese,” Father Sorra said.

Long before Gray’s death, there were marches on Pennsylvania Avenue in Baltimore in response to the death of Michael Brown in Ferguson, Mo., Father Bomberger said.

He focused on one placard he had seen, which read: “No justice, no peace.”

“You know, that’s pretty threatening,” Father Bomberger said, but he added that after he had considered it for a while, “it sounded familiar.”

“Peace is a result of true respect for man,” he said. “And we call this justice.”

The priest added that the majority of protests he had seen were peaceful.

“That disturbance, that rioting, is not really reflective of this community,” he said.

Father Bomberger was joined by Ray Kelly, a member of the St. Peter Claver parish council and president of the No Boundaries Coalition, a resident-led group seeking to unify the neighborhoods of West Baltimore.

“For me, St. Peter was, as long as I can remember, a community sanctuary,” Kelly said. “With the unrest, it was important to me that we re-establish that role.”

Elder C.W. Harris of the Newborn Community of Faith, also based in Sandtown, said that faith leaders should approach community-building endeavors with humility and expect adversity.

“Ego is completely out, because no one’s going to pat you on the back for choosing this profession,” he told the seminarians. “You will be ridiculed more than you will be praised.”

He commended the future priests for visiting Sandtown.

“It would have been much easier to go to an area like Roland Park, an area where no one’s nodding on the corner, and no one’s smelling of urine,” Elder Harris said.

Father Zaborowski noted that priests in the archdiocese are uniquely poised to help their neighborhoods due to the simple fact that they reside in them.

Both he and Middleton advocated for ongoing dialog between a neighborhood and its parish.

After the unrest in late April, Father Zaborowski said, “we responded immediately by opening up the parish just to talk.”

In those conversations, Middleton said, young residents expressed a desire for mentors.

Father Zaborowski advised the seminarians to see their ultimate obedience to the archbishop as a gift.

“When you give yourself over to that completely, great things can happen,” he said. “It really is the power of the (Holy Spirit) that just puts you where you want to be.”

Seminarian Matt Himes, 26, from St. Isaac Jogues in Carney, said that he was excited to tour the city on the pilgrimage.

“It’s very humbling for us to understand the suffering of the people of this city,” said Himes, who had been assigned to St. Ambrose for a year of pastoral learning.

“I think it’s important that we as seminarians see as much as we can of the urban center of our Baltimore Archdiocese,” he said.

“I think all of us are called to go where the need is,” said new seminarian Scott Kady, from St. Peter in Westernport. “We can read about the inner city in the newspapers and magazines, but when you actually experience it, that’s the revelation.”

Hand made for ministry

In 2009, the Catholic Review followed three seminarians throughout their first year of studies at St. Mary’s Seminary in Roland Park.  All three are now serving as priests in the Archdiocese of Baltimore.

Read part one, part two and part three of the award-winning series, which covers the joys and struggles of preparing for the priesthood.