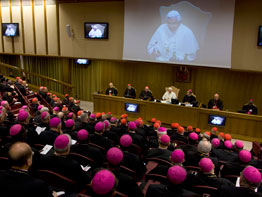 ROME – At a Mass to open the world Synod of Bishops on the Bible, Pope Benedict XVI said knowledge of Scripture was essential to the church’s evangelizing mission in an increasingly godless society.

“It is indispensable that the church know and live that which she proclaims, so that her preaching is credible, despite the weaknesses and poverty of her members,” the pope said Oct. 5 at the Roman Basilica of St. Paul Outside the Walls.

“Only the word of God can profoundly change the heart of man,” he said. The need for such conversion is great in today’s confused society, in which human beings sometimes proclaim themselves “the only masters of creation,” he said.

Following the papal liturgy, the pope kicked off a marathon reading of Scripture on Italian television. The next day, at the first Vatican assembly of the three-week synod, about 300 synodal participants listened to a report outlining the main themes of discussion.

Key topics included the need to strengthen religious formation and remedy “the ignorance of the Scriptures,” the improvement of preaching based on Scripture, and greater guidance on biblical interpretation – perhaps through a new papal encyclical.

The pope convoked the 12th general assembly of the Synod of Bishops on the theme “The Word of God in the Life and Mission of the Church.” He was to preside over most of its twice-daily sessions and accept its conclusions as the basis for a likely papal document on the topic.

He celebrated the opening Mass in the basilica dedicated to St. Paul in part because the church is marking the 2,000th anniversary of the saint’s birth, and in part to highlight the connection between Scripture and evangelization.

The pope, dressed in gold and green vestments, processed into the basilica with bishops from around the world. Also in attendance were synod delegates from other Christian churches.

In his homily, the pope said the purpose of the synod was to consider “how to render more effective the proclamation of the Gospel in our own time” and to underline the need to “place the word of God at the center of our life.”

Like St. Paul, who evangelized with enthusiasm and urgency, the church today senses new opportunities for spreading the Gospel, he said. But it also recognizes that in some parts of the world, Christians have fallen away from the practice of faith, he said.

“If we look at history, we are forced to notice the frequent coldness and rebellion of incoherent Christians. Because of this, God, while never shirking in his promise of salvation, often had to turn toward punishment,” he said.

The pope noted that some flourishing early Christian communities have disappeared, and asked: “Could this same thing not happen in our day and age?”

The pope, turning to a dominant theme of his pontificate, asked whether people who remove God from their lives can truly be happy, and really can build a just and peaceful world.

“Is it not more likely – as demonstrated by news headlines every day – that the arbitrary rule of power, selfish interests, injustice and exploitation, and violence in all its forms, will extend its grip?” he said.

On the evening of Oct. 5, the pope read from the Book of Genesis as he led off a Bible-reading marathon on the Italian state television. He was followed by Russian Orthodox Bishop Hilarion of Vienna and Austria.

Each of about 1,200 people from 50 countries – including Catholics and other Christians, as well as several Jews and Muslims – was to read for between four and eight minutes until all 73 books of the Catholic edition of the Bible have been read.

The synod got down to business Oct. 6, with the reading in Latin of a lengthy pre-discussion report. Prepared and presented by Cardinal Marc Ouellet of Quebec, the synod’s recording secretary, it synthesized the main themes that have emerged during months of preliminary consultations.

Cardinal Ouellet told reporters afterward that the synod would come up with concrete suggestions for helping Catholics learn to read the Bible, to pray with it and to share its message with the world.