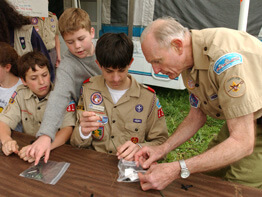 IRVING, Texas (CNS) — Participating in Boy Scouts is a great way for youths to meet people in all walks of life and help them discern their own vocations, says Monsignor John B. Brady, a 65-year veteran of Scouting.

In an interview with Scouting, a family magazine published by the Boy Scouts of America, Monsingor Brady said jamborees — nine-day national or international gatherings of Scouts and their leaders — provide opportunities for vocational discernment “not equaled in any other environment.”

“At each of the seven jamborees on which I have been privileged to serve on staff, I have had the opportunity to help about 1,000 Scouts discern their life’s calling,” he said. “Other jamboree staffers, such as doctors, surgeons, optometrists, engineers, pilots, military personnel and the like, have shared their professions and experiences with Scouts who consult them.”

He said the “excitement, enlightenment, reverence and camaraderie” of a jamboree combine to increase youths’ openness to thinking about what direction their life should take.

Scouting interviewed Monsignor Brady after he received the National Catholic Committee on Scouting’s 2006 Silver St. George award, given to Catholic Scouting leaders for “especially significant” accomplishments and service at the national level.

A priest of the Washington Archdiocese, Monsignor Brady, 77, was archdiocesan chaplain for Boy Scouting, Girl Scouting and Camp Fire Boys and Girls from 1960 to 1984. He is a longtime member of the national committee’s advisory board and is currently acting Scouting chaplain for the committee’s Region 4, covering dioceses in Maryland, Virginia, West Virginia, Delaware and the District of Columbia. He founded the committee’s national Scouter Development program.

According to the magazine, there are currently some 9,500 Boy Scout units chartered by Catholic institutions in the United States, serving more than 305,000 Scouts.

Monsignor Brady said he experienced the first U.S. national jamboree in 1937, when he was 8 years old and he visited the encampment on the National Mall in Washington.

He joined the Boys Scouts in the seventh grade and went on to become an Eagle Scout.

Speaking of jamborees as occasions for vocational discernment, he said, “This happened in my own life. Monsignor Robert Brown, the chaplain of the international section of the second jamboree, held at Valley Forge, Pa., in 1950, helped me to discern that God was calling me to be a Catholic priest rather than a Signal Corps Army officer, a patent attorney or a professional Scouter.”

He said that Scouts have to meet personally with one of the camp chaplains sometime during the jamboree in order to qualify for the “Duty to God” segment of the jamboree patch.

He cited Scouting as a “powerful program” to help meet the goals that the U.S. bishops set out in their 1997 document on Catholic youth ministry, “Renewing the Vision.”

“The goals,” he said, “are these: to empower the young to live as Christ in our world; to draw them to responsible participation in the life, mission and work of the faith community; and to foster the personal and spiritual growth of each young person.”

He added that Scouting is especially effective in fostering all-around personal and spiritual growth.

“Taken together, the Scout oath and (Scout) law — beginning with ‘duty to God’ and ending with ‘a Scout is reverent,’ two bookends for the entire Scouting program — comprises one of the world’s best tools to challenge young people to live by the highest standards that God expects of the human beings he places on this earth,” Monsignor Brady said.

He also had special praise for Scouting’s high adventure programs, such as the one at Philmont Scout Ranch in New Mexico, where he has also served as chaplain.

“I think that a 12-day high-adventure trek can accomplish more for a young person than two years in a troop or crew program back at home — because the challenge is greater, the difficulty is greater,” he said.

“It’s just a wonderful opportunity for a young person to change from a very scared, unsure person to someone who goes home more mature and filled with confidence about what he or she can actually do,” he said.