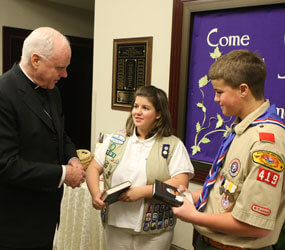 St. Michael the Archangel School and parish in Overlea have forged a mutually beneficial bond with the Kempske family.

Eight years ago, Mike and Linda Kempske wanted their oldest, Elizabeth, to return to Catholic schools after commuting for second and third grade to a private school in Bel Air they had considered best suited to meet her dyslexia.

They found an ally in Patricia Kelly, the principal of St. Michael the Archangel, who welcomed Elizabeth, accommodated her needs and watched her flourish. In turn, Kelly discovered a most giving family, one that has used the ideals of the Scouting movement to better themselves and their community.

“This family,” Kelly says, “puts forth service to others as one of their core beliefs.”

It’s been a very good week for the Kempskes.

A Dec. 5 ceremony at St. Michael the Archangel combined recognition of Elizabeth’s Gold Award, the highest honor a Girl Scout 14-18 can earn, with an Eagle Scout Court of Honor for her brother, Jacob. He’s a sophomore at Archbishop Curley High School; she’s a senior at The Catholic High School of Baltimore.

Their sister, Rebekah, an eighth-grader at St. Michael the Archangel, served as mc.

“To draw over 130 people last night to share in their accomplishment, that shows great life in the parish,” Archbishop O’Brien said. “The family is so much a part of this, the parents, the grandmother, the sister. It’s the way things work, when we’re on all cylinders.”

Their energy is decades in the making.

Mike Kempske is a shift supervisor for Constellation Energy, and Linda is an operating room nurse who teaches at the Essex campus of the Community College of Baltimore County. Both have Scouting roots, and both went to Immaculate Heart of Mary School in Baynesville and then Towson Catholic High School.

“Both of us went to Catholic schools for 12 years, and want to give the same opportunity to our children,” Mike Kempske says. “This is about more than reading and writing. This is about character-building, helping you grow into a confident, contributing member of society.”

At Catholic High, Elizabeth is captain of the It’s Academic team, works in the library, and is president of the Library club and TV studio. In the summer of 2009, she was one of two dozen Catholic High students to tour Italy.

Jacob aims to be part of a Curley crew visiting World War II historic sites in Europe next summer. He plays JV soccer and lacrosse for the Friars, is involved in student government, the literary magazine Visions and the cooking club, an interest sparked by his mother.

“At the beginning of the school year, each unit gets a lemon meringue pie baked by Mrs. Kempske,” said Kelly, the St. Michael the Archangel principal. “For Catholic Schools Week, she brings in her ‘Death by Chocolate.’ She is a go-getter, who leaves no stone unturned to raise money for our school.”

The Kempske children have provided their own inspiration.

Jacob let his St. Michael the Archangel classmates know it was cool to be on the chair committee, which helps set up the hall for school functions, and join the parish’s Boy Scout Troop 419. His sister’s leadership reaches far beyond the parish’s Girl Scout Troop 1881.

“Elizabeth was the genesis of our Lenten Meals outreach,” Kelly said. “When she was in the eighth grade, she organized her troop to prepare meals for Friday night. The community came in for a meal, and then Stations of the Cross. We still do that every Friday during Lent, as the parish has continued what she began.”