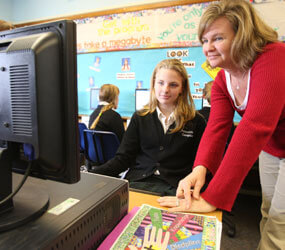 The Internet Resources, Safety and Ethics Contest, sponsored by Verizon Pioneers Maryland Chapter 44, featured submissions from schools throughout the Archdiocese of Baltimore.

The St. Mary video, called “No Bullying,” starred students in a short film that preached the dangers of cyber-harassment. In it, students can be seen showing how much words can sting even on the computer.

St. Thomas Aquinas School in Hampden came in second place with their video called “NetSmartz Kids.” The Web site www.netsmartz.com picked up the video, which featured students finding out the dangers of being on social networks at a young age. The school also won a mini-computer.

Third-place winner Immaculate Conception School, Towson, shined with its video, “Be Yourself,” as did fourth-placed winner St. John Regional School, Frederick, and its submission, “I Found Bad Stuff on the Web.” Both schools received flip video camcorders.

“(The students) all worked very hard on these videos,” said Redline, the archdiocese’s director of academic technology, of the many submissions. “They’re so precious in these videos.”

To see the videos of the winners, visit www.ideas4us.com/safetycontest.htm.