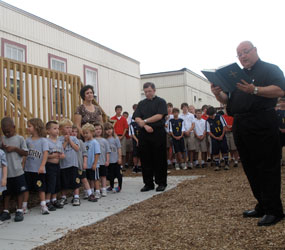 With Catholic schools trying to find ways to bolster enrollment, some institutions are discovering that the key to success is going back to the basics.

St. John the Evangelist School in Severna Park and St. Louis in Clarksville have re-launched or expanded pre-kindergarten programs to great success this fall.

The result is a lot like Play-Doh. The students and the school are molding each other.

Both parish school programs have attracted many more students than originally estimated and are filled to capacity as they have unveiled new and renovated rooms for 4-year-old children.

St. John has 18 students enrolled in the half-day and full-day programs each, while two classes at St. Louis have 30 total students.

“Parents want their children all in the same educational facility,” said Sister Linda Larsen, principal of St. John the Evangelist and a member of the Sisters of St. Joseph. “If they’re planning on a Catholic school education at kindergarten, why not at pre-school?”

Both St. John and St. Louis have been honored during the last few years as Blue Ribbon Schools of Excellence by the U.S. Department of Education.

Now, pre-K programs are helping each school push its total enrollment to more than 500 students this year.

Of the 36 children at St. John’s new program, 26 of them have no brother or sister in school.

“When I look at the make-up of the full-day classroom, it’s almost like there’s a whole new generation coming through the school,” Sister Linda said.

The school previously had a pre-K program, but had to shut it down to make room for full-day kindergarten five years ago. Archbishop Edwin F. O’Brien, now apostolic administrator for the Archdiocese of Baltimore, granted permission for the school to install portable classroom space behind the school’s building, which happened during the last year.

“The children are formed early and for the parents, there was obviously a desire,” Father Proffitt said. “We didn’t expect this. We were figuring 12 in each class. That would have been a success. It meets a need and strengthens our enrollment.”

St. John anticipated 475 students in kindergarten through eighth grade, but has 493 this year. The 36 pre-K children bring the total to 529 total children.

Students learn manners, socialization, days of the week, how letters and numbers work and the Pledge of Allegiance. Plus, they might do a hip version of the Hokey Pokey.

“They are infant learners,” Sister Linda said. “Everything they do in pre-school is a learning experience.”

They also begin their day with prayer for family members, a sibling or even a pet.

“We are able to form them in the Catholic tradition,” said Sister Linda.

“This place is a big family,” Stephen said. “Kids want to come here. They say, ‘Can I go where my brother or sisters go?’ It’s a nice flow.”

Besides trepidation of parting with her mother for the school day, Ella loves going to school, Stephen said, and loves wearing her jumper uniform.

“She loves to hear the announcements and gets to say the prayers,” the mother said. “We’ve spent so much time here that it’s her home. She’s been here since she was an infant.”

St. Louis expanded its pre-K program to two classes this fall by moving to one of the biggest classrooms in the building.

The message especially hit home as St. Louis used their monthly open houses to gauge interest in a pre-K program with potential parents.

“The list was growing and growing,’ Weiss said. “We have a lot of parishioners who are just so excited we had room for their child. They’ve heard really good things about our pre-K.”

Weiss and Sister Linda each praised the work of their pre-K teachers as loving, nurturing and committed to building academic foundations for the children.

Like St. John, Weiss said pre-K is building a future for the children and for the school.

“It’s doubly good for us,” Weiss said. “It’s a feeder for us and it also fulfills a need for parishioners and parents in the area who want a Catholic education for their children. It’s nice to have a pre-K program connected to an elementary school.”