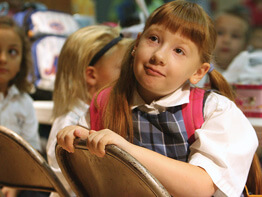 As students at Sacred Heart of Mary School, Dundalk, burst out of their various minivans and cars and scampered into the red-brick building for the first day of school Aug. 27, the uniform-clad boys and girls carried with them a colorful array of knapsacks, many of which were on wheels.

Like a scene in a busy airport, a bulk of the youngsters toted behind them carrying cases resembling wheeled luggage, as they gathered in the school cafeteria for morning prayers.
“It really is kind of funny to see them wheeling that stuff behind them,” said Pamela Walters, 28, the new principal at the school, who served as assistant principal last year.

Sixth-grader Sarah Stefanski of Dundalk – weighed down by a large backpack and a green book bag – hurried across the school parking lot to greet Ms. Walters and tell her how excited she was about beginning the school year.

“It’s so good to be back,” said the 11-year-old girl with a smile that spread cheek to cheek. “I am going to miss sleeping in late, but I can’t wait to see my friends and meet the new kids coming to school this year.”

Toni Szymanik of Essex watched from along the side of the cafeteria during the pledge of allegiance and morning prayers as her 12-year-old son Robert began his first day of seventh grade at Sacred Heart of Mary.

“I have one back in school today and my other son (David) has orientation (at Loyola, Blakefield in Towson) tomorrow,” Ms. Szymanik said.

Like students at several Catholic schools within the Archdiocese of Baltimore, the 15-year-old sophomore doesn’t actually begin classes until Sept. 4.

“We had a really nice summer and took a trip to Florida,” Ms. Szymanik said. “But, I think we’re all ready for the school year to begin.”

School couldn’t have started earlier for Alex Kahn, 17, of Crownsville as he began his senior year at Archbishop Spalding High School, Severn, Aug. 27.

Alex and pal Pat Joyce, 17, of Arnold said their senior year promises to be chock full of good times with long-time friends and last hurrahs as they prepare to go to college in the fall of 2008.

“Don’t let these guys fool ya, they don’t even know how to spell their names,” joked Bert Kiessling, their world religion teacher.

“But I know how to pronounce mine,” Alex interjected with jocular self assuredness.
Both young men have already begun practice on the school’s hockey team and are eager to begin the new season, their last with the school.

“As seniors, we also get to wear any kind of shoes we want,” Pat said. “Plus, we get out of school a few weeks before everyone else.”

For incoming freshman Briana Bracey, 14, of Severn, the first day of school marked a new chapter in her educational career, going from a veteran at School of the Incarnation, Gambrills, to one of the 300 new freshmen at Spalding, which has more than 1,100 students sporting white and khaki uniforms walking the hallways between classes.
Though Briana attended orientation and a retreat at the school the week before the first day of classes began, she said the crowded hallways were a little intimidating.

“I know a few upperclassmen,” said the freshman, who is excited about trying out for the basketball and lacrosse teams and finally playing high-school sports. “But I have no illusions. I know we are the runts of the school.”

But, Ms. Trumpler greeted them with a devilish grin on her cheery face. “It’s so much fun having them all back.”