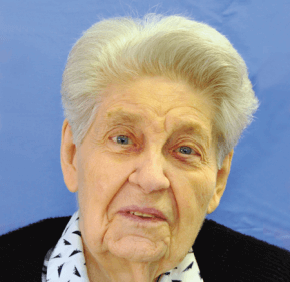 A funeral Mass for School Sister of Notre Dame Mary Annita Link was offered July 17 at the chapel at Villa Assumpta in Towson. Sister Mary Annita died July 10. She was 89 and had been a sister for nearly 68 years.

A native Baltimorean, Sister Mary Annita entered the religious order in 1941. She professed first vows in 1944.

Growing up, Sister Mary Annita attended St. Brigid, Canton, and graduated from the Institute of Notre Dame in Baltimore.

Sister Mary Annita was the director of religious education at St. Ann, Hagerstown, from 1979 to 1986 and at Holy Family Catholic Community in Middletown from 1986 to 1989.

From 1991 to 1994 she was a secretary at St. Maria Goretti High School in Hagerstown.

After her retirement in 1994, Sister Mary Annita volunteered at St. Ann, Hagerstown, and at the hospice at Greater Baltimore Medical Center in Towson.

She moved to Villa Assumpta in Towson in 2000.

Sister Mary Annita earned a bachelor’s degree in English and education from the College of Sacred Heart in Puerto Rico in 1956 and a master’s degree in education administration from Loyola University Maryland in Baltimore in 1969.