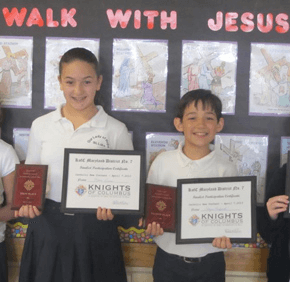 By Catholic Review Staff
Our Lady of Hope-St. Luke School students compete in faith bee, essay contest
Maria Lessis and Shayne Auffarth, fifth-graders at Our Lady of Hope-St. Luke School in Dundalk, placed first and second, respectively, in the Knights of Columbus District 7 Catholic faith bee contest April 7.
Aleysa Wieczynski and Madison Cote, fourth-graders at the school, also participated in the contest.
Meanwhile, eighth-graders Hayle Kyte and Julia Olaguer placed first and second, respectively, and seventh-grader Lynn Diven placed third in a recent Dundalk American Legion Post 38 essay contest.
These three students were among the 63 students who submitted entries on the topic “What Freedom Do I Enjoy the Most?,” according to information from the school.
Mother Seton School students recognized for trustworthiness
Twenty students from Mother Seton School in Emmitsburg were nominated by their teachers for exemplifying the virtue of trustworthiness and setting an example for their peers to follow, according to information from the school.
The following students were Christian Character Traits awardees for March: Maria Canadas-Fraga, Reese Collins, Micah Crisp, Anna Eyler, Ethan Georgoff, Elizabeth Gillis, Jonathon Glass, Hannah Hartness, Levi Hohenstein, Isaac Jenkins, Matthew Knox, Edward Lowry, Gavin Marshall, Grace Mazaleski, Brendan McCormick, Michael Metz, Lloyd Shumaker, Cassidy Sill, Gabriel South and Issiah Wivell.
Students at Mother Seton are encouraged to be honest, reliable, loyal and to have the courage to do the right thing, according to information from the school.
Mother Seton School students compete in annual science fair
Nearly 120 Mother Seton School students in grades three through eight participated in the Emmitsburg school’s annual science fair March 20.
“With the enthusiasm and effort the students put into their projects, the hardest part of the fair is having to grade them,” said Danielle Kuykendall, Mother Seton’s middle school science teacher, in a statement.
The results are as follows:
First place: third-grader Shae Archie; fourth-grader Natalie Bosche; fifth-grader Ana Hand; sixth-grader Maria Torborg; seventh-graders Maya Hand and Edison Hatter; and eighth-grader Anna Eyler.
Second place: third-grader Caitlin Marron; fourth-grader Olivia Sica; fifth-grader Brede Laug; and seventh-grader Emily Longanecker.
Third place: third-grader Bella Rabaiotti; fourth-grader Marshall Mott; fifth-grader Jeremy Hochschild; sixth-grader Caroline Mullineaux; and seventh-grader Stephen Hochschild.
Honorable mention: third-graders Brody Holz and Natalie Jacobson; fourth-grader Chase Stull; fifth-graders Darren Byrne, Lea Roberts and Carleton Walker; sixth-grader Gareth Moxley; and seventh-graders Gabby Ferraro and Hallie Mauk.
Calvert Hall, Mount St. Joseph students selected for elite basketball team
Sophomores Drew Edwards from Calvert Hall College High School in Towson and Bryce Thurston from Mount St. Joseph High School in Irvington participated in this year’s U.S. Elite-Select basketball tour March 30-April 1 in Milan, according to information from Maryland 3D Basketball Club’s website.
The U.S. Elite-Select basketball team participated in the Junior International Tournament Invitational, which has been held for more than 20 years in Milan, according to information from Maryland 3D Basketball Club.
“I’m excited to be part of this team and learn from some great coaches,” said Drew Edwards in a statement, “and I’m looking forward to testing my talents against the best players in Europe.”
Edwards and Thurston were two of the 12 players on this year’s roster.
Resurrection-St. Paul School joins Ray Rice’s campaign
Resurrection-St. Paul School in Ellicott City has joined Ray Rice’s “Links of Kindness” anti-bullying campaign.
The campaign aligns with the school’s values code and the Positive Behavior Intervention System launched at the beginning of the academic year, according to information from the school. Students were asked to write messages of hope, kindness or a promise not to bully on a purple link they were given from Rice’s foundation.
Members from the school’s Make a Difference club collected about 500 purple links which have been sent to Rice, according to information from the school.
The school’s Make a Difference Club is comprised of about 50 middle school students and meant to promote acts of kindness within the school and community, according to information from the school.
IND alumna and teacher to bike and build for affordable housing
Catherine McGrain, a 2007 Institute of Notre Dame alumna and math teacher, has signed up with 30 other cyclists for Bike and Build, an organization that raises money and awareness for affordable housing, IND announced.
“I teach Algebra 1 at IND. One of my goals for my students is that they become contributing members of a global society,” McGrain said in a statement. “I hope to be a role model for them in this way and what better way than to take advantage of such a wonderful experience as Bike and Build.”
Participants cycle more than 4,000 miles across the U.S and construct affordable housing in 11 cities, according to information from the Baltimore school.
“The first stop on the rebuilding tour is Providence, R.I.,” McGrain said in a statement. “Then we move onto cities in Connecticut, Pennsylvania, West Virginia, Illinois, Kansas, Utah and Nevada. Our last build will be in Stockton, Calif.”
One requirement of Bike and Build is that McGrain raises $4,500 before she sets out in early June, according to information from IND. Donations are accepted and tax deductible.
To donate, visit her page at https://bikeandbuild.org/rider/6573.
“I can’t think of a better way to spend my summer than enjoying the outdoors and raising money and awareness for a great cause,” McGrain said in a statement.
For more news on Catholic education click here.