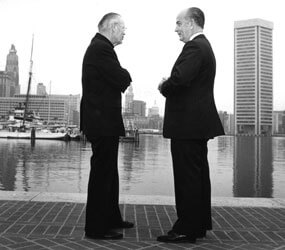 Catholic leaders remembered William Donald Schaefer – former Baltimore City councilman, longtime mayor, governor and state comptroller – as a dogged man who cared passionately about his community and who tried to leave his city and state better than he found it.

He was hailed as a visionary who championed the city’s development and supported Catholic institutions. Yet, Schaefer was also recalled as the man who signed one of the most permissive abortion laws in the country and refused to budge in his support of the death penalty.

Schaefer died April 18 at Charlestown Retirement Community in Catonsville. He was 89.

In a written statement, Archbishop Edwin F. O’Brien called Schaefer “one of the greatest civic leaders we have known.”

“As mayor and governor, William Donald Schaefer was a partner and friend to my predecessors,” Archbishop O’Brien said, “championing the needs of others throughout his many years of service. As we celebrate this Holy Week, we encourage prayers for the repose of the soul of our late Governor, and give thanks to God for his selfless service.”

“He was very supportive of that,” said Bishop Newman, who attended several baseball games with the late governor. “He understood the need and the service that chaplains provided.”

Bishop Newman said Schaefer was “really out for the betterment of the community.”

“He was very sincere,” Bishop Newman said. “He got things done and he wasn’t afraid to face what had to be done – and ‘do it now.’”

Mercy Sister Helen Amos, former president and CEO of Mercy Medical Center in downtown Baltimore, said Schaefer was a strong ally of Catholic health care. His mother was cared for at Mercy, Sister Helen said, and Schaefer often told stories of how much his mother loved the hospital.

“He was generous to us,” Sister Helen said. “When we did the capital campaign for the Weinberg Center, he served as one of the honorary co-chairs. He just stayed a real strong and faithful friend for as long as he had energy to give.”

As mayor, Schaefer helped win city funding for the expansion of Bon Secours Hospital in Baltimore and was awarded the hospital’s “Humanitarian Award” in 1975 for his efforts.

In a 2008 interview with The Catholic Review, the late Archbishop William Donald Borders said he and Schaefer were close friends.

“When I was appointed to Baltimore, the second person I heard from after Cardinal (Lawrence) Shehan was Schaefer – in a telegram,” Archbishop Borders remembered. “It said: ‘Welcome to Baltimore. We William Donalds will have to stick together.’”

When Schaefer was governor, he proposed a plan to provide $2,900 vouchers to 200 low-income Baltimore schoolchildren for use in public or non-public schools. The proposal never won support among lawmakers.

Four years earlier, as a first-time candidate for governor, Schaefer favored public financing of abortions for the poor. He reversed his stand once he became governor – giving hope to pro-life supporters that he could support some pro-life positions.

In 1991, however, Schaefer signed a law that allowed abortions until the fetus is able to survive outside the womb. The measure also undid a provision that women be informed of state resources for women who give birth and changed a conscience clause that had allowed health care workers to refuse to make abortion referrals on religious or moral grounds.

At the time, then-Archbishop William H. Keeler signed a statement with the leaders of the Archdiocese of Washington and the Diocese of Wilmington, calling the law an “abortion-industry protection measure” that did “grievous injustice” to health care providers who oppose abortion.

While governor, Schaefer also allowed the execution of John Thanos to proceed.

Schaefer’s 11 a.m. funeral service will be held April 27 at Old St. Paul’s Church in Baltimore.
Click here for a blog about the two William Donalds.