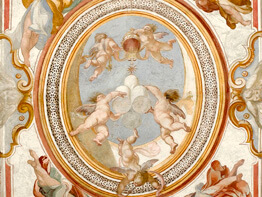 VATICAN CITY – When a Vatican-led team of art restorers started scrubbing and scrutinizing what was underneath centuries of soot and grime caked on the ceiling and walls of a major shrine in Rome, they made a spectacular discovery.

A whole pictorial series of brilliantly colored, 16th-century frescoes by influential Flemish landscape artist Paul Bril and others had been hidden under the dust and dirt.

And now, after seven years of study, planning and restoration, pilgrims flocking to the Sanctuary of the Scala Santa (Holy Stairs) will be treated to the visual treasure when they enter its chapel of St. Sylvester.

Salvaged from the chapel’s crumbling and blackened walls are “these very beautiful landscapes” extolling the beauty “and exuberance of nature,” said Arnold Nesselrath, director of the Vatican’s Byzantine, medieval and modern collections and head of the chapel’s restoration work.

The landscape style had been developed in northern Europe and was brought to late-Renaissance “Roman culture by artists like the Bril brothers,” he told Catholic News Service June 12 at a press conference at the shrine.

Alessandro Zuccari, professor of modern art and one of the project’s historians, said although Pope Sixtus V, who commissioned the frescoes, “was stern, he loved pictures to be simple, joyous and serene.”

Pope Sixtus brought in about 40 artisans to paint more than 18,000 square feet of frescoes throughout the building, which was built in the late 16th century to house the Holy Stairs and other sacred treasures.

But time and tourism took their toll, and “after centuries of degradation and little upkeep” much of the sanctuary was in dire need of renovation, said a June 12 press statement from the sanctuary.

Thanks to almost $500,000 in grants from the Los Angeles-based J. Paul Getty Trust and additional funding from the province of Rome, a small portion of the complex – the St. Sylvester chapel – has been returned to its original splendor.

Even the chapel’s large wooden choir stalls were refurbished – a task that involved lots of patient scraping.

One restorer said it was unbelievable how many wads of chewed gum left by tourists were found stuck to the seats and rails.

But earlier restorers were responsible for some of the damage inflicted on the frescoes.

A white, lead-based paint had once been used to brighten the paintings. But the white pigment eventually oxidized, turned brownish black and blocked out the image it was intended to highlight.

Oils, sticky glues and varnishes also had been applied to shine up scenes dulled by time and dimmed by candle smoke and soot.

Nesselrath said the walls and ceilings were “all black,” and while they knew frescoes were underneath, no one had any idea what many of the scenes and details looked liked.

Chemicals, state-of-the-art laser technology and “mechanical cleaning,” which sometimes means using good old elbow grease, got rid of most of the sticky substances and dirt. But the oxidized lead patches would not budge.
With help from the Vatican Museums’ research department, restorers devised a way to chemically reverse the oxidation process, and dark blotches disappeared like magic. Restorers also repaired the flaking and crumbling plaster by injecting adhesives and special mortar under the frescoes and essentially gluing everything back to the wall.

Deborah Marrow, director of the Getty Foundation, told CNS that “it was really a model project, an outstanding, important work that is having a lot of impact on the field of conservation in terms of how you document and treat these wall paintings.”

The years of research, planning and restoration will be appreciated by many: Between 2,000 and 15,000 pilgrims a day –2 million people a year – visit the Sanctuary of the Scala Santa.

Many come to climb the shrine’s stairs on their knees, pray at the Sancta Sanctorum – the private chapel of the popes during the Middle Ages – and venerate a silver and jewel-covered Byzantine image of Christ.

According to tradition, the Holy Stairs are the ones Jesus climbed when Pontius Pilate brought him before the crowd and handed him over to be crucified. The 28 marble steps have been covered with thick wood panels, now worn smooth from centuries of human traffic. The curious can still catch a peek of the ancient marble underneath through open slats on the risers.

The shrine and its care are entrusted to the Passionists, who led the campaign to win recognition and grants for the restoration of the frescoes.
Now with just one chapel repaired and resplendent, the Passionists are wondering where future funding will come from so they can tackle the rest of the dark, dingy and, in many areas, decaying interior.

One priest pointed to a huge marble statue of Pope Pius IX, who put the shrine in the care of the Passionists, and said he had cleaned it himself after a stone-worker friend gave him special cleansers. Nine years later, the statue is back to being gray and dirty.

At the other end of the shrine’s entry hall, a woman climbs a stepladder to dust off a marble representation of the “Pieta.”

First she sweeps it with a dry paintbrush, but as clouds of black soot cascade off Jesus, Mary and an angel, she starts brushing with a broom head whose handle has been lopped off. Today the dirty culprits are no longer smoky candles, but the hundreds of cars, diesel buses and buzzing mopeds belching exhaust just a few yards from the shrine entrance.