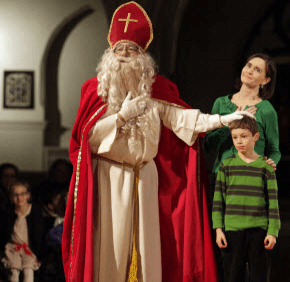 By Susan McCormick
Many years ago, my oldest son started the sixth grade at Loyola Blakefield. Come December, he came to me and said, “Mom, I’m not a little kid anymore. I want to know the truth about Santa Claus. All the guys are telling me there is no such thing. Do you believe in Santa Claus?” I took a breath, carefully thinking through what I was going to say…
“Yes, Charley, I do believe in Santa Claus. But just like you rode a tricycle before you could ride a bike, children learn stories about Santa before they are old enough to understand the generosity of St. Nicholas. Are you ready to take the leap?” Eyes wide with fear, he slowly nodded.
I continued, “When you were 3 years old, more than anything else in the world, you wanted a red Power Ranger for Christmas. They were very popular that year. In fact, they sold out at the factory. There were a few blue Power Rangers available, and even one green Power Ranger… But you had asked Santa for a red one!”
I told him how I had gone to Toys “R” Us every day, hoping one would come in from backorder. I told him how I went to all the other toy stores in the entire city of Baltimore, but there were none to be found. I told him how I tried to convince him that the other colors were just as good, but he wouldn’t have it. I told him that I became desperate and didn’t know what to do. And how, in my desperation, I said a prayer to St. Nicholas for help.
On the very last day – Christmas Eve – I went to Toys “R” Us one more time. My eyes were filled with tears because I didn’t want to disappoint my precious child. Lo and behold, the woman standing in front of me in the Customer Service line was returning a red Power Ranger! I was so excited that I kissed her! And when I got home that night, I got down on my hands and knees and thanked St. Nicholas.
I explained to my son that stories about Santa Claus have been circulating all over the world for centuries. The original legend grew and grew into a great myth, becoming more and more outlandish with each telling, until the story came to include the North Pole and flying reindeer.
Somewhere in all that circulation, miracles, which come from God, became confused with magic, which is associated with the occult. “Santa” the myth became confused with Nicholas the saint. And because of that, all good Christians had to reject the concept of Santa when they became adults.
But if we remember that St. Nicholas is a saint just like any other saint, and that he receives his ability to perform miracles – small and large – through the power of Jesus Christ, then there is no reason to reject his legend. We can all believe in Santa Claus, forever.
Susan McCormick is a parishioner of the Catholic Community of St. Francis Xavier in Hunt Valley.
Also see:
Monsignor Miller, ‘mountain of a man,’ laid to rest
Monsignor Slade Catholic School rallies around student, family
PrevNext