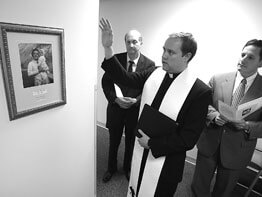 A group of four Catholic physicians in Catonsville found it particularly appropriate to have relics from St. Gianna Molla installed in their Catonsville offices on Nov. 13.

Dr. Damian Birchess, a family practitioner and member of the Baltimore Guild of the Catholic Medical Association, said the four doctors came together because they wanted a medical practice where they could be “comfortably Catholic.”

Dr. Birchess was contacted by Father Michael A. DeAscanis, associate pastor of St. Ursula, Parkville, who wanted the relics to find a home in a medical facility.

“We thought we’d be a natural fit,” Dr. Birchess said, noting that St. Gianna Molla was a pediatrician and as family practitioners they, too, care for children.

“The three of us were enthused,” he said, noting that Dr. Commerford hesitated, worried that the framed photo and relic from the saint might make non-Catholics uncomfortable. “But we got her to sign on,” he said with a laugh.

St. Gianna Molla was a practicing pediatrician in Italy in the 1950s, whose life and medical work were an example of lived faith. According to the book “Saint Gianna Molla” by Pietro Molla and Elio Guerriero, in 1962 she was pregnant with her fourth child when doctors discovered a fibroma, a benign tumor, on her uterine wall. The recommended treatment would be surgery that would involve aborting the baby. As a doctor, she knew the recommendations and the risk to herself. Trusting in prayer and God, she insisted the doctors perform a surgery that removed only the fibroma and spared the child. The pregnancy continued, but a few days before the birth, St. Gianna made her husband promise that if he had to choose between her life and the life of the baby, he would save the baby.

The baby girl was delivered successfully on April 21, 1962, but St. Gianna developed septic peritonitis. The fatal infection caused intense suffering, and as she was dying she proclaimed her love for Jesus. She died on April 28 at 39.

The daughter she sacrificed her life for grew up and became a physician, too, and she was present at her mother’s canonization in Rome in 2004.