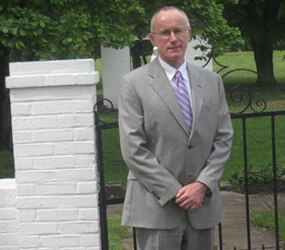 Appointed by the school’s board of trustees, Oliver replaces Dr. Jack Campbell, who served for the past academic year as interim president. Oliver comes to St. John’s from Highland School in Warrenton, Va., where he has been the assistant head for institutional advancement.

Oliver received his undergraduate degree in English from Georgetown University, a master’s in Theological Studies from Notre Dame School of Christendom College and a graduate certificate of Advanced Professional Study/Fund Raising Administration from The George Washington University.

Gregory E. Harraka, chairman of the board of trustees, said “We look forward as Gordon becomes a part of the fabric of our school community. We have extreme confidence that Gordon will continue to enrich our strong and demanding college preparatory programs and be an integral part of our plans to build our state of the art campus for our students and families.”

Oliver, a Catholic, is married and has two grown children. He will be on campus frequently to meet with members of the school community in the coming weeks.

He was one of the nation’s premier high school distance runners in 1972, when he won the high school mile at the Penn Relays in 4 minutes, 8.7 seconds for Bethesda-Chevy Chase High. It remained the Penn Relays record until 2007, when Matt Centrowitz of Broadneck High ran 4:08.38.