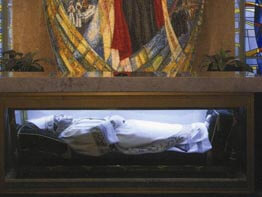 Some come in search of physical healing. Others seek a deeper connection to God. Still others want to deepen their knowledge of one of the Catholic Church’s most revered figures of 19th century America.

Each year, more than 12,000 visitors, mostly from the East Coast, travel to the National Shrine of St. John Neumann in Philadelphia on a spiritual pilgrimage.

The shrine is located in the lower level of St. Peter Church in inner-city Philadelphia. Dedicated to the fourth bishop of Philadelphia who had earlier served at several Redemptorists parishes in the Baltimore archdiocese, the shrine features a museum with St. John Neumann artifacts and a gift shop.

The body of the Bohemian-born saint is displayed at the front of the lower-level church beneath the altar. Visitors often prayerfully touch the glass and ask for the saint’s intercession for special needs.

“Without a doubt, that is the most popular part of the shrine,” said Father Raymond Collins, C.Ss.R., associate director of the shrine. “He was very close to the hearts of many people. It’s a place of pilgrimage for people on a sacred journey.”

At a young age, St. John Neumann was named provincial leader of the Redemptorists before being named bishop of Philadelphia. As spiritual shepherd of the City of Brotherly Love, the saint promoted Forty Hours Devotion, a eucharistic devotion that was practiced throughout his diocese. He was canonized in 1977 by Pope Paul VI.

St. John Neumann was originally buried in the cellar of St. Peter in January of 1860. During his canonization process, the body was exhumed in 1962 and found to be well preserved before being relocated to its present site.
The saint’s face was disfigured as the cross on the lid of the original coffin pressed against him over the decades. A wax mask now covers the saint’s face.

People have traveled to St. Peter for many years to visit the resting place of the famous saint, according to Father Collins. The slab that was placed over St. John Neumann’s tomb still sits in the floor of the lower level of the Baroque church, he said. The shrine also is home to the stone on which the saint rested after he collapsed on Vine Street in Philadelphia and died at age 48.

The shrine is unique because it resides in an active parish of some 500 registered families, according to Father Collins. The faith community still operates a school led by the School Sisters of Notre Dame.

Many confirmation students make retreats at the shrine, and the site is open to bus groups and individual visitors. Confessions are heard Monday-Saturday at noon and 5:15 p.m. and Mass is celebrated on weekdays at 7:30 a.m., 12:15 p.m. and 5:30 a.m. Weekend liturgies are also celebrated.
The shrine is open from 7:30 a.m.-6 p.m. daily. Bus groups are asked to call in advance to schedule a visit.