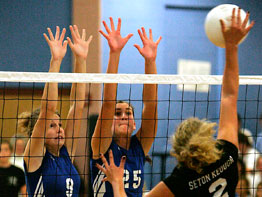 Friends and families, alums and faculty gathered along the pathways of the historic high school on an uncharacteristically warm October afternoon to meet and greet while two of the five fall teams got down to business.

According to de Sales’ athletic director, Gene Williams, this year’s homecoming boasted the largest turnout in his six years at the school. “Our campus was full, and the weather was great. A number of school clubs set up in the piazza, and the energy level was just extraordinary,” said Williams. “And, you know, whenever we play Seton Keough, anything can happen.”

Kicking off the action on Oct. 6, the Sailors’ soccer team (2-6, 4-8) faced the Gators in an IAAM A Conference contest and came away with a 2-1 win on a first-half goal from sophomore Morgan Kavanagh, recently called up from the junior varsity program, and a second-half goal from junior Mary Linz.

The following day, the field hockey and volleyball teams faced off, and again the Sailors dominated. But before the contests got underway, both teams joined at either midfield or center court to join in prayer together before the whistle blew and play got underway.
“It was great to see both schools’ teams praying and even talking and laughing together. This weekend was everything a sports rivalry should be,” said Gene Williams. “It was just a very positive experience.”

“I have to give it to team captain, junior Kasey Mercier for that match,” said volleyball head coach Kenny Mills. “Kasey had five aces and went 15 for 18 from the service line. In addition, Kasey had 10 kills on the match.”

Before the games, Mount de Sales players presented their opponents with a bottle of Gatorade garnished in green shoelaces, acknowledging Seton Keough’s colors.