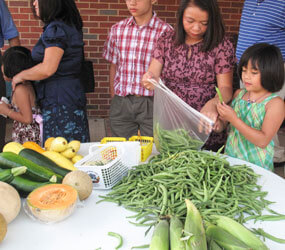 WASHINGTON – “No one should go hungry, wherever they live in the world,” said the National Catholic Rural Life Conference in the first of a six-part essay series in which it issued “a Catholic call for a new agriculture.”

But “by the end of this year, weather disruptions and rising food prices may drive” the number of hungry people in the world “back to 1 billion, where it last peaked in 2008 due to a spike in food prices,” the conference said. “That’s one in every seven people.”

“It is not good for America to plow under the natural affinity of people to the land. It does not serve our nation as a beacon to other nations to do the same to their people and lands,” it said. “Let us right ourselves and begin again to work with nature’s God to secure bread and dignity for all.”

In calling for “a new agricultural ethic,” it said that one linchpin of such an ethic would be the concept of “food sovereignty,” where “stakeholders strive to participate in policy decisions concerning their food and how it is managed. Their focus is on social justice and improving the opportunities for everyone to produce and consume the type of food commensurate with their local culture. They see agribusiness corporations as interfering in their nation’s food system, not enhancing it.”

Coupled with food sovereignty is food security, “a basic calculation of how much food needs to be produced by farmers in order to meet the caloric needs of a population,” the rural life conference said.

“The bottom line is sustainability – for the environment, for local farmers, for the diverse cultures of eaters,” it added. “The teachings of the church call for a fair distribution of the goods of the earth; the next step is how to put this into action.”

One essay invoked words spoken by Pope Benedict XVI in an Angelus message from last November: “Everyone should be taught to consume in a wiser and more responsible way. We should promote personal responsibility along with a social dimension of rural activities based on the undying values of hospitality, solidarity and sharing the toil of labor.”

The rural life conference said another aspect of a new food system includes “sustainable and diversified agriculture that directly fits local needs. This means focused attention on small-scale farmers – both women and men – in order to achieve food security and poverty reduction in the world.”

It added that Pope Benedict XVI had spoken of his own worries about the lack of diversity in food production. “His fear,” it said, “was that this would create situations of ‘extreme poverty among the masses, and the depletion of the natural resources of the earth.’“

“We believe the global food system as dominated by transnational corporations and industrial interests is leading the world away from food security,” the rural life conference said. “A new balance is needed in farming, industry and services so that no one will lack in bread or work.”

“Our demands keep rising – more people eating meat, growing demand for biofuels – and thus pushing production of the land to its limits,” the rural life conference said. “If we want any hope of keeping up with these demands, the world will need to double, perhaps triple, agricultural production in the next 30 to 40 years.”

However, the rural life conference argued, “by our choices and understandings about food, we can begin to influence others. We can teach our children to know where their food comes from and why it is important to be thankful for farmers and food workers. We also begin to see the need to support a world agricultural system of small farmers, because viable livelihoods are the only way to end poverty and hunger at the local level.”

The rural life conference said it would issue a sixth essay on the topic of using food as biofuels.