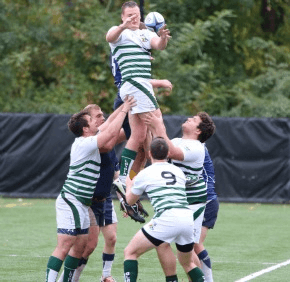 By Jeff Seidel
Special to the Review
Kenny Ames stood on the field behind Loyola University of Maryland’s Fitness and Aquatics Center as darkness fell Oct. 20. Hands on hips, the assistant coach of Loyola’s rugby team watched it go through its paces in a shortened practice.
Ames had already had a busy day, but the vice president of operations for Advanced Radiology always finds time for rugby, a sport in which he’s been involved since he began playing as a freshman at the college 36 years ago.
“Rugby is a sport that, sort of by its very nature, fosters a brotherhood between players,” Ames said. “It fosters those bonds that last for a long time.”
That link is particularly strong among Jesuit high schools and colleges, as evidenced by the side the U.S. sent to the Rugby World Cup in England, which included a coach and two players from Manhattan’s Xavier High School.
While the U.S. is a long way from challenging the likes of New Zealand and Australia, who meet Oct. 31 in the World Cup final, Jesuits will be in action that day at Loyola Blakefield, where Loyola University and Wheeling (W. Va.) Jesuit University meet in a pair of matches, starting at 1 p.m.
The Jesuit Rugby Classic marks the second time the two schools have met, according to Bill Filbert, who played for Wheeling Jesuit in the 1970s. Like many other alumni of the college, he lives and works in Baltimore.
Men’s rugby is not recognized as a varsity sport by the NCAA. While Loyola’s club plays in the Potomac Rugby Conference, Wheeling Jesuit is ranked among the Top 10 college clubs nationally and competes in the rugged Rugby East,  against the likes of West Point.
“Our team’s really pulled together between the players and the coaches in the (last few years),” Loyola’s Jack McCormack said. “We’ll learn from them, and hopefully they (Wheeling Jesuit) can see that we’re not just another random club.”
Ames hopes the Jesuit Rugby Classic could be the first step toward resuming a Jesuit invitational tournament, which it hosted for a decade starting in the early 1980s.
“It’s something we’ve talked about, maybe re-igniting that tournament,” Ames said. “This is a good step forward, I think.”
Ames said the Loyola club will celebrate its 40th anniversary next year, and notes that some former players, the “Society of the Loyola Old Boys,” have formed a 501(c)(3) organization to help raise money for rugby scholarships.
Ames said that whenever Loyola played at another Jesuit institution, a different feeling was in the air. Both teams would play hard against each other and later socialize and form strong bonds.
At the high school level, many Baltimore-area private schools compete in rugby. Some will stick with the sport for many years, such as Ames, who is fascinated at how easily rugby cuts across generations. He’s seen guys who played in the 1970s and 80s become friends with those who took up the sport 20 and 30 years later.
“I played sports my whole life,” Loyola team captain Tom Callaghan said, “basically every sport under the planet. But there’s really no comparison to the camaraderie in rugby. Rugby is really the sport where you’re only as strong as your weakest link.
“You need to rely on each other.”