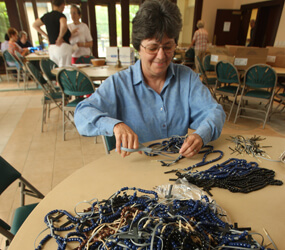 Pat Evans had big dreams when she helped coordinate a rosary-making campaign for U.S. servicemen six years ago at St. Mary in Annapolis.

Still, she can hardly believe the effort has blossomed to 25 nationwide parishes and Catholic institutions and is nearing the 300,000th crafted “ranger rosary.”

Evans sees the work as a mission and a way of letting the troops know they aren’t forgotten. It provides soldiers, sailors and airmen a means of holding onto their Catholic faith as they serve far from home.

“It’s amazing,” Evans said. “This just keeps getting bigger and bigger. We get requests for more rosaries all the time.”

Chaplain Jesse Vega, stationed at Contingency Operating Base Speicher in Iraq, recently wrote to say how much the prayer beads mean to the soldiers in his Army National Guard unit.

“They especially find it a comfort to carry one when they go on missions outside the wire,” Vega wrote. “They all know that there is a possibility that they won’t be coming back, and I think it helps them to focus on their faith and gives them a spiritual assurance.”

Hundreds of other appreciative letters have streamed in from servicemen and chaplains.

Many men and women in uniform never see a Catholic priest because there aren’t enough Catholic chaplains, Evans said.

“The rosary is a bridge or link to their Catholicism,” she said. “Mary wants to be with her children – especially those in harm’s way.”

Parishioners have made more than 200,000 ranger rosaries and ship about 600 prayer beads weekly with pamphlets explaining how to pray the devotion.

Parishioners of the Church of the Resurrection in Ellicott City have made 44,000 ranger rosaries, with other parishes in the Archdiocese of Baltimore and elsewhere making the rest.

Volunteers make naval rosaries out of gray parachute cord and royal blue beads, along with desert rosaries made with tan cord and brown beads. All feature a black crucifix.

Julie Walton, coordinator of the ranger rosary effort at Church of the Resurrection, said volunteers pray at least one decade of the rosary over every string of beads they make, asking God to bless the person who will receive it and all parishioners serving in the military.

“What makes this ministry so special is that prayer is at the heart of it,” Walton said.

The rosary-making network is funded through donations. It costs about $1 to make and ship each rosary. The prayer beads have been sent to Iraq, Afghanistan, stateside military bases, military hospitals and elsewhere.

“Every single chaplain from every service academy called, and they all want them for their grads and some wanted them for first-year students,” Evans said. “Isn’t that marvelous?”