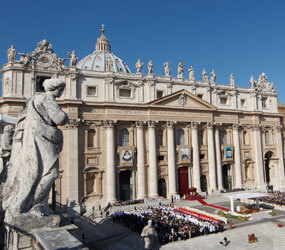 ROME – Thousands of Catholics in Rome celebrated the first feast of Blessed John Paul II Oct. 22 and the promoter of his sainthood cause said he has received several reports of healings that could be the miracle needed for the late pope’s canonization.

Monsignor Slawomir Oder, the postulator of Pope John Paul’s sainthood cause, told Vatican Radio, “I have received several very significant testimonies and am waiting for the complete documentation” that would allow him to judge which would be the most appropriate to submit to the Vatican.

“I was particularly struck by the healing of a little girl who was in an almost desperate situation and another very touching testimony regarding the healing of a priest,” he told the radio Oct. 22.

The Polish priest also noted that for the first time many little boys and girls named Karol or Carolina or John Paul, Jean Pierre or Giovanni Paolo were able to celebrate their name day, an important day in many countries and cultures.

He said that after Pope John Paul died in April 2005, “many people asked his intercession to obtain the grace of paternity and maternity, and having received that grace, they honored him by naming their children after him.”

In Rome, Blessed John Paul’s feast was marked with two particularly large celebrations: the Diocese of Rome held a prayer vigil and Mass at the Basilica of St. John Lateran, the diocesan cathedral.

The Church of the Holy Spirit near the Vatican, known for its dedication to the Divine Mercy devotion promoted by Pope John Paul, hosted a special Mass and a concert featuring important texts written by the late pope set to music.