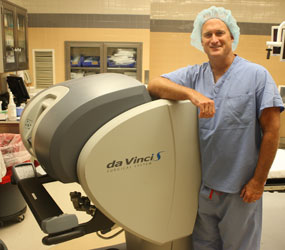 Dr. Robert Thompson, a Mercy Medical Center urologist since 1994, has seen a number of advances in the treatment of disorders affecting the urinary tract and male reproductive system.

“Some of our older patients find it amazing what we can do now,” Dr. Thompson said. “Lasers, freezing, microwaving … now we’ve got the robot.”

Along with St. Joseph Medical Center in Towson, Mercy is among the hospitals in the Baltimore area making use of the “da Vinci” robot, a $1.5 million device which utilizes laporoscopic ports and computer visuals to allow specialists easier access to a patient’s anatomy.

It can be used, but not restricted to, the treatment of prostate disorders.

The prostate, a gland about the size of a walnut, produces fluid that is one of the components of semen.

According to the Web site maintained by Intuitive Surgical, which markets the da Vinci robot, one in six men in the United States will be diagnosed with prostate cancer. For some, the treatment is a prostatectomy, the removal of all or part of the prostate.

From early June, when Dr. Thompson began using the da Vinci robot at Mercy, to July 23, when he talked to The Catholic Review, he had used the device to perform nearly 20 prostatectomies.

How does the robot – something of a misnomer, as a physician is operating the device – improve the process of removing cancerous cells?

“We place laporoscopic ports into the patient, and insert instruments through the ports,” Dr. Thompson said of technology that incorporates fiberoptics. “You leave the (operating) table and go over to a console, and it’s almost like a video game. You operate everything from there.”

“Because we do this through laporoscopic ports, visualization is much better. This used to be a fairly bloody procedure when it was done by hand, but now there’s a lot less bleeding and we can actually see the landmarks in the anatomy (on screen).”

Dr. Thompson, a parishioner of the Cathedral of Mary Our Queen in Homeland, grew up in St. Athanasius Parish in Curtis Bay. He was blessed with good hand-eye coordination, as he played baseball for Calvert Hall College High School and then the University of Maryland Baltimore County, but acknowledges that God-given gifts are enhanced by the da Vinci robot.

“We can see the nerves,” Dr. Thompson said, “which better allows us to better maintain potency and continence with prostate patients. That was a huge issue, and the incidence (of incontinence) has decreased with the robot. Patients are also getting out of the hospital a lot faster. This used to be a three-day stay, but every one of my patients with the robot thus far has gotten out the next day.”

The end result is a healthier patient.