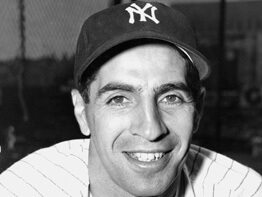 NEWARK, N.J. – Yankee legend Phil Rizzuto, who died Aug. 14 at age 89, will be remembered for many things, not the least of which will be the amount of money he raised for St. Joseph’s School for the Blind in Jersey City, a private Catholic institution founded and sponsored by the Sisters of St. Joseph of Peace.
He raised more than $2 million through his work organizing celebrity golf tournaments as well as through his own family’s donations.
As a result of Rizzuto’s generous charity work, the school opened a new two-story, 75,000-square-foot facility in Jersey City Feb. 20. The school previously utilized facilities that had been in place since the 1920s.
St. Joseph will hold its 17th annual golf outing Aug. 20, and it is expected the event will be dedicated to the Yankee great’s memory and his work to support the school.
A member of Major League Baseball’s Hall of Fame, Rizzuto was a five-time All-Star – in 1942 and 1950-53. He later announced Yankee games for four decades.
Rizzuto lived in the Westminster section of Hillside in Union County, which is part of the Archdiocese of Newark. He and his family were parishioners at the Church of St. Catherine of Siena in Hillside. He died in his sleep at a nursing home in West Orange, N.J.
His daughter, Patricia Rizzuto, told The Associated Press he had pneumonia and his health had been failing for several years. Funeral arrangements were not announced; services will be private.
Rizzuto’s heartfelt connection with St. Joseph’s School for the Blind began in 1951 when he met a 12-year-old boy named Ed Lucas. Lucas, a resident of Jersey City, was blinded in a freak incident when he was struck between the eyes with a ball while playing baseball.
Lucas recalled that, ironically, his tragic accident occurred Oct. 3, 1951 – the date of Bobby Thompson’s “shot heard ‘round the world,” one of the most famous home runs in the history of Major League Baseball.
An avid Yankee fan, young Lucas met Rizzuto in November 1951. At the time the Yankee All-Star worked during the off-season at the American Shop – a clothing store on Broad Street in Newark. Lucas’ mother arranged the meeting as a way to boost the spirits of her disabled son.
Lucas – interviewed Aug. 14 via cell phone by The Catholic Advocate, Newark’s archdiocesan newspaper, while he was on his way to Yankee Stadium in the Bronx section of New York – recalled that he and Rizzuto immediately formed a bond.
When the 1952 baseball season opened, Rizzuto invited Lucas to Yankee Stadium. That also was the year that Lucas entered St. Joseph’s School for the Blind – the only school for the blind in New Jersey.
As the lifelong friendship between the lad and the ballplayer unfolded, Lucas became deeply involved at St. Joseph’s School – first as a student, then as an active alumni and eventually as a member of the school’s board of directors in 1985. Because of his friendship with Lucas, Rizzuto also developed an affection for the school and contributed funds to support the organization.
One day in the early 1990s, Lucas recalled that he and Rizzuto were talking about the school’s future.
“Scooter, we need to build a new school,” Lucas said. Rizzuto suggested they launch a celebrity golf outing to help raise money – an idea that proved to be a huge success over the years and enabled the school to build its new facility.
Known as “the Scooter” because of his blazing speed and slick fielding skills, Philip Francis Rizzuto was born Sept. 25, 1917, one of five children of Rose and Fiore Rizzuto. He grew up in Brooklyn, N.Y. When he was 12 his family moved to the New York borough of Queens. He graduated from Richmond Hill High School.
Rizzuto broke in as a rookie shortstop with the Yankees in 1941. He served three years with the Navy in World War II, 1943-45, then returned to the Yankees.
In 1950, he was named Most Valuable Player of the American League. He played on Yankee teams that won 11 pennants and seven World Series between 1941 and 1956, which was his last season as a player with the Yankees.
After his playing days, he became a longtime TV announcer for the New York team. His on-air exclamation “Holy Cow” became his trademark as a broadcaster.
Once on the air in 1978, when learned of the death of Pope Paul VI, he said: “Well, that kind of puts a damper on even a Yankee win.”