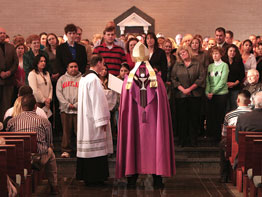 Approximately 715 catechumens and candidates will enter the Catholic Church in the Archdiocese of Baltimore at the Easter Vigil.

The men, women and children of all ages took their next big step on that journey Feb. 10 as they were presented to the bishops of Baltimore during the Rite of Election.

The catechumens and candidates have been going through a period of formation and discernment. The Rite of Election signifies they’ve determined they’re ready to enter into the sacraments. It’s an ancient practice that dates to the fourth century, when Christianity moved from an underground, secret religion to a public one.

The formation period usually takes about a year for candidates and up to three years for catechumens.

Sharon A. Bogusz, archdiocesan coordinator for Evangelization and Adult Catechesis, said the formation period “takes as long as it takes” because it’s not about a timetable but about an individual’s “ability to grow in relationship with Christ. Discernment is a very important part of the process.”

After the Rite of Election, catechumens are known as the elect; candidates continue to deepen the call first received at their baptism.

During Lent, like all Catholics, both groups undergo a time of preparation and enlightenment, focusing on prayers, fasting and the discipline of Christian life, “conforming one’s life more deeply to Christ,” Ms. Bogusz said.

When they’re present at Mass, the readings will emphasize the healing aspects of Jesus’ ministry and his call for conversion.

“We hear about moments of great conversion for those that have gone before us,” Ms. Bogusz said.

The last three Sundays of Lent celebrate special rites known as the Scrutinies. The elect, and the community with them, scrutinize the areas of life where one struggles to live the disciplines of the Gospel.

“Together, we ask for strength in Christ, who is the way, the truth and the life, to help us be true to our call,” Ms. Bogusz said.

Peter Lee is a sponsor for candidates and catechumens at Holy Korean Martyrs, Woodlawn. The parish had the largest group – 27 catechumens and two candidates – participating in the Rite of Election.

Mr. Lee said he didn’t understand the significance of baptism when he was baptized as an infant, and he’s excited to learn more and share his faith today.

In his remarks, Cardinal William H. Keeler, told the catechumens and candidates, “Your pilgrimage is with Jesus Christ. He leads and accompanies us on our journey. He identified himself with these words, ‘I am the way, the truth and the life.’ He elaborated on those points, and concluded by saying, “May these coming days of Lent see you grow in your knowledge of Jesus as the way, the truth and the life. May God bless each of you catechumens and candidates, and may God bless all who have helped you on your way to full communion in the Catholic Church.”

Their faith journey doesn’t end at Easter. After the Easter Vigil is a period known as mystagogy, a Greek word that means leaning into the mystery.

“This does not end their formation at all,” Ms. Bogusz said. “It’s the beginning – the beginning of a life of learning and living the Gospel message of love.”