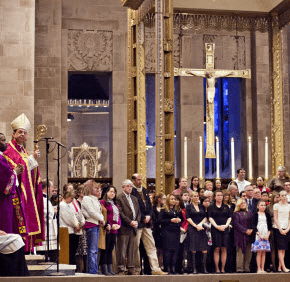 This year, at age 59, Ronnie King attended his first Ash Wednesday Mass – and enjoyed it.

“When he (the priest) put the ash on my forehead, it felt like a warm feeling,” said King, a parishioner of Sacred Heart in Glyndon who has not been baptized.

King married wife Nancy, a Catholic, 41 years ago. They raised their two children in the faith.

“It’s taken me almost 60 years to realize what I was missing,” King said. “The more I know (about Catholicism), the better I feel. I’m looking to the future now.”

King was one of nearly 400 candidates and catechumens from nearly 50 parishes who filled the Cathedral of Mary Our Queen in Homeland Feb. 17 for the annual Rite of Election.

During the Rite of Election, godparents gathered with catechumens and sponsors with their candidates. Catechumens signed the Book of the Elect at their home parishes.

During his homily, Archbishop William E. Lori told the elect that “your presence here today is a sign of hope and joy, not just for me, but for the entire Archdiocese of Baltimore and for the whole church.”

After mentioning Pope Benedict XVI’s decision to resign, Archbishop Lori said “you might be wondering or concerned about the future of this church which you are about to join or join more fully, a church which has just received such seismic news. But let me say to you this afternoon take heart. You have nothing to fear.”

He continued, “The church will never abandon you because Christ will never abandon his church. It is a privilege for me to walk with you through that door of faith, especially in this holy season of Lent, this time of intense preparation.”

Daphne Hicks, a candidate and parishioner of St. Peter Claver and St. Pius V in West Baltimore, said joining the church “means a closer relationship with God, an opportunity to serve.”

“I feel right at home within the Catholic community,” Hicks said. “I feel very blessed and honored to be amongst people of the Catholic faith. I’m very proud to say that I am a Catholic.”

Lent is a time of conversion, Baltimore archbishop says at Ash Wednesday Mass