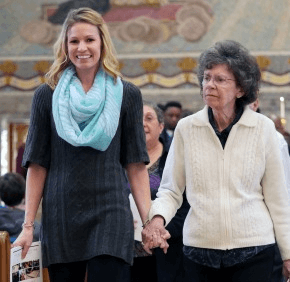 By Karen Osborne
kosborne@CatholicReview.org
Twitter: @ReviewOsborne
EMMITSBURG – Brittany Bickerton wants to raise her three daughters as Catholics. She and her family go to Mass at St. John the Evangelist in Frederick and participate in parish life. Their oldest girl, Rosalynn, is scheduled to celebrate her first holy Communion in April.
For Bickerton, who had been baptized Catholic but not raised in the Church, it didn’t feel right that she couldn’t fully participate on Sundays alongside her daughters as they grew in their own lives of faith.
“It was time,” she said. “It was important to be a part of that, to be a leader. I wanted to have Communion with the girls. I thought, ‘How am I going to show the girls how important this is, if I’m not doing it myself?’ It felt hypocritical. I wanted to be a role model.”
To view photos from the slideshow, navigate the arrows below.
Bickerton, one of 61 adult candidates and catechumens who participated in the Rite of Election and the Call to Continuing Conversion at the National Shrine of St. Elizabeth Ann Seton in Emmitsburg Feb. 22, will take her first Communion and receive confirmation at the Easter Vigil.
More than 600 people will be baptized or received into full communion with the church in the Archdiocese of Baltimore this Easter, consistent with the average of the past few years, according to Ximena DeBroeck, director of the Office of Worship and Sacramental Formation for the archdiocese.
The Rite of Election, conducted at three locations Feb. 22, included 607 participants from 71 parishes. The rite was conducted at the Cathedral of Mary Our Queen in Homeland, St. John the Evangelist in Severna Park and the Shrine of St. Elizabeth Ann Seton in Emmitsburg. Catechumens, who will be baptized and receive the other sacraments of initiation (confirmation and reception of the Eucharist), include a total of 153 adults and 54 children (cathedral – 105 adults, 18 children; St. John – 26 adults and 27 children; shrine – 22 adults and 9 children). Candidates, who were previously baptized in the Christian faith but never confirmed, include 369 adults and 31 children (cathedral – 276 adults, 27 children; St. John – 65 adults and 2 children; shrine – 28 adults and 2 children).
DeBroeck noted that not all parishes that have catechumens or candidates take part in the archdiocesan celebrations of the Rite of Election, so the number of those coming into the church at Easter may be higher.
For many candidates, the call to be Catholic is also a call to tighten family ties. In Emmitsburg, uncles sponsored nephews, husbands sponsored wives, and engaged couples sat together, holding hands.
Sisters Ornella and Valencia Miafo, parishioners of St. Mary in Hagerstown, are following in the footsteps of their father, Valentin Miafo. As children, they attended another church.
Going back to St. Mary with their father changed their perspective on faith, Ornella Miafo said.
“I resonate with a lot of what the church says,” she explained. “All the teachings – it just feels right. Whenever we attended Mass, whenever the priest was talking, it just hit me, made me want to be a better person. I would like to feel officially included, not an outsider looking in.”
For Bickerton, the classes she’s taking at St. John have done more than teach her about Catholic doctrine and tradition – they have bound her family closer together. “The experience I’ve had so far has been so enriching and I’ve learned so much,” she said. “I’ve been able to learn things with Rosalynn. We are reading the books together. There is so much I’m gaining from learning with her. It’s just awesome.”
Candidate Melissa Crockett was baptized in another Christian denomination, but has a long family history with the shrine. Her grandmother and sponsor, Ann Warner, was born Catholic, and many members of her family regularly participated in community outreach programs alongside the Daughters of Charity.
Some of Crockett’s fond childhood memories involve sitting in the courtyard at the shrine, visiting the sisters with her grandmother and father.
“The formality of it, seeing the sisters dressed (in their habits), it was something I was drawn to as a little kid. All of the sisters gave you such special treatment and were always so interested in what you were doing,” she said. “I have lots of memories here.”
As an adult, Crockett found herself on a faith journey, moving from church to church, trying to find out where she fit.
“The Catholic Church was where I felt at home,” she said. “It’s like a marriage. I’m finally getting to that. I feel like I’ve been dating for 30-some years!”
Candidate James Stone, who will be received into the church at the age of 74, was first invited to join social events and worship services at St. Katharine Drexel by his neighbor and now-sponsor, Marilyn Beall, after a long absence from church.
“We’re taught to evangelize. I just thought it would be nice for him to go and share the joy that I have,” Beall said.
Stone enjoys the sense of community and togetherness that being part of Mass and events at St. Katharine’s brings him. “I enjoy it,” Stone said. “I love everybody in it. The friendly people, the good services. Years back, I went to church, but when I was older, I got away from it. Now, I’m starting again. I’ve put my mind to it and this is what I am going to do.”
Also see:
Rite of Election 2014
After heart attack, pastor not afraid of dying
Pope: Don’t let meatless Fridays be selfish, soulless seafood splurge
PrevNext