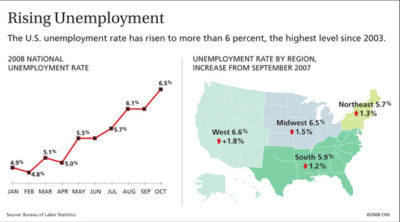 WASHINGTON – Catholic Charities agencies across the country are finding that the nation’s growing unemployment rate is one more factor in their efforts to provide food, clothing and shelter to those in need.

In Michigan – where automobile giants General Motors, Ford and Chrysler are based – unemployment is a reality for thousands of people once employed in the car industry and for business owners hit hard by the collapsing economy.

“People are being laid off continually,” said Chris Root, who heads the Lansing, Mich., Diocese’s Catholic Charities department. The agency’s offices around the diocese help people pay for rent and utilities, provide food and help the unemployed with a job training program.

The demand for all these services is increasing significantly, Mr. Root said.

Counseling for domestic abuse, substance abuse and for family and marriage problems all have been on the rise since the financial downturn, Root noted in a Nov. 12 interview with Catholic News Service. “The strong correlation between economics and marriage and the well-being of family life is evident here. There is an increased need to assist people in the family dynamics, and relationships.”

According to the U.S. Labor Department statistics released Nov. 7, the jobless rate rose to 6.5 percent in October when employers fired 240,000 workers. That figure put the total number of unemployed Americans past 10.08 million, the highest level in 25 years.

One year ago, the jobless rate was 4.8 percent. Many economists are saying the rate could climb to 8 percent or 8.5 percent by the end of 2009.

“The impact on the states has been tremendous,” said Paul Martodam, CEO of Catholic Charities in the Phoenix Diocese.

Currently, the Phoenix agency is only able to help up to 40 percent of those who seek assistance. It is providing more utility and emergency assistance than in previous years and finding it more difficult to help people find jobs with livable wages.

Cutbacks in service-related industries such as retail, restaurant and construction – along with a 5 percent decrease in federal funds and a 20 percent decrease in donations – has made it tough to assist those in need. The Phoenix Catholic Charities agency also has had a decline in staff from 610 to 537 employees.

Dominick Calgi, CEO of Catholic Charities of Eastern Virginia in the Richmond Diocese, said the agency’s offices have seen a 25 percent increase in the number of people applying for housing and utility assistance and they also have experienced a decrease in donations.

Reduced donations at a time when the population “is at its greatest need” is a major concern, he said.

“It is urgent for more foundations to change their priorities to funding social service needs in a time like this instead of arts and culture organizations,” he added.

Catherine L’Insalata, a division director at Catholic Charities in the Archdiocese of Newark, N.J., said she also has seen an increase in demand for services amid a simultaneous decrease in contributions.

She said there has been a 25 percent increase in people seeking services who have been recently unemployed. “For some that need food or shelter, we struggle to accommodate them because there is not enough money available,” she told CNS Nov. 12.

As she sees it, Catholic Charities agencies alone can’t meet the needs of the increased number of clients.

“State and local governments need to respond to this crisis of health care, prescriptions, utility and rent needs of the unemployed as fast as they have responded to the fall of big American companies,” she said.

“These people need a bailout,” she added.