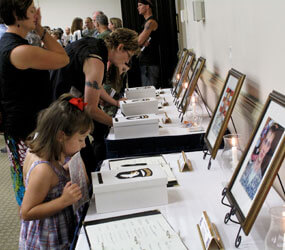 FORT CAMPBELL, Ky. – At the July 21 Eagle Remembrance Ceremony for nine fallen Fort Campbell soldiers, families of those who made the ultimate sacrifice paused in front of portraits of their loved ones to embrace and wipe away tears while members of the standing room only crowd did the same.

“It’s really hard to even imagine what they’re going through,” Lt. Col. Joel Hamby said of the families. “There aren’t any words. I’ve never been able to find the right words to say in something like that. The words are just inadequate.”

Hamby, who has lost several friends during the United States’ nine-year war in Afghanistan, said the sacrifices become much more real “when you can actually put a face to it.”

“These are our friends. These are the people we raise our kids with,” he said.

The remembrance ceremony was the largest since the Screaming Eagles of the Army’s 101st Airborne Division returned to Afghanistan in January. “It’s been a rough couple of months,” said Hamby, an officer with the division’s rear detachment, and “it’s only going to get worse” as more Fort Campbell troops are set to deploy.

Since March, 36 soldiers from the 101st Airborne Division have been killed.

Five of the nine men remembered July 21 were from Capt. John Peters’ battalion. While the loss of any life is devastating, he said, the soldiers “know the dangers of the profession and most wouldn’t rather be doing anything else.”

While more politicians and pundits have recently begun questioning whether the lives lost and billions of dollars spent in Afghanistan are worth it, the soldiers remain confident that they are making positive strides there. “It is a worthwhile operation,” Peters said. “The sacrifices were not in vain.”

But it’s the families, he said, who must “carry the burden of their sacrifice,” he said. “They didn’t sign up for the Army, but they still have to deal with the consequences.”

The families of the fallen, Peters said, aren’t so concerned with the larger geopolitical picture of the war on terror; they just want to know “what happened on the ground when their loved one was killed.”

To help the families cope with the loss of a loved one, the Army has a strong support network in place, including the Family Readiness Groups on post and the Army One Source hot line, which can connect family members anywhere in the world with a chaplain or therapist.

A family’s relationship with the Army “doesn’t end at the end of the ceremony,” Peters said. “We keep the relationship permanent.”

Deacon Dominick Azzara of Immaculate Conception Parish in Clarksville, located just down the road from Fort Campbell, said news about the record number of coalition troops killed in Afghanistan this summer “is very personal because it involves the local division and local people.”

“It’s very hard,” to hear the news, said Denise Tucker, principal of St. Mary School whose husband was preparing for deployment in August. “You’re somewhat relieved that it’s not one of your own” (in the parish or school community) who died, she said, “but you’re still upset because it’s another human being.”

It is harder during the summer months when members of the school community, which is about 40 percent military, don’t see each other very often, Tucker told the Tennessee Register, newspaper of the Nashville Diocese. Once school starts back up in early August, the Faithful Friends support group for students, moderated by a Catholic Charities counselor, will get in full swing and everyone will be able to keep better tabs on each other.

“Anything that affects the 101st does affect the city and the parish,” said Deacon Azzara, a retired Army officer.

Deployment hits families hardest, but its effects ripple throughout the Fort Campbell and Clarksville communities, the deacon said.

“The economic impact is big,” he said. When that many people are suddenly gone from the area, a flood of rental property becomes available and “a lot of pizza and cheeseburgers are left sitting on the shelf” at nearby fast-food restaurants.

“All the people in the community are affected by the absence” of the deployed 101st soldiers, he said.