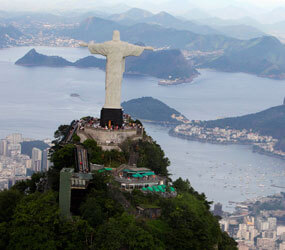 WASHINGTON – By sending World Youth Day back to Latin America, Pope Benedict XVI is calling the world’s attention to the region’s Christian past, said Archbishop Orani Tempesta of Rio de Janeiro, host city for the 2013 event.

The region’s Christian roots “are being lost, little by little, to the false belief that we are secular country,” he said in an interview posted on the Brazilian bishops’ World Youth Day website, www.jovensconectados.org.br.

He added that the events of World Youth Day will help “reaffirm our commitment to help the world, Brazil, and our city to become better and better.”

“Catholic youth make a difference in the world,” he added.

The last World Youth Day in South America was in Buenos Aires, Argentina, in 1987. The choice of Rio de Janeiro to host the World Youth Day creates a “big challenge” but also “a very special moment for the church in Brazil,” the archbishop told reporters in Madrid after the pope announced that Rio would host the next World Youth Day.

With less than two years to organize the event, scheduled for July 23-28, 2013, the archdiocese is working with the bishops’ conference to form planning teams.

“Several steps have been taken, the fees are already being developed and we hope that by the end of this year, everything will be organized so that we can finalize the selection of locations and all the programming,” said the archbishop.

On Sept. 18, the symbols of World Youth Day – a cross and an icon of Mary – arrive at Campo de Marte airport, where Pope Benedict XVI celebrated Mass during his 2007 visit. Activities at the event, called “Botafe,” a Brazilian expression meaning “believe in it,” will include singers, celebrations, testimonies and Mass.

Following the World Youth Day theme, “Go, therefore, and make disciples of all ye nations,” the cross and icon will travel through the 17 regions of Brazil and four other countries in South America: Paraguay, Uruguay, Chile and Argentina.

In a September meeting with archdiocesan clergy, Archbishop Tempesta told them World Youth Day would “be a great opportunity for evangelization, for working with youth, and at the same time, transforming each one of us in the mission to proclaim Jesus Christ to the world.”

Archbishop Tempesta, the 61-year-old host of the international youth gathering, is already an active communicator with young people through social networks such as blogs, Twitter and Facebook. He is a member of the Brazilian bishops’ social communications commission.

The youngest of nine brothers, he served as an altar server and catechist, and he joined the Cistercian order in 1968.

“I heard that God was calling me to religious life,” said Archbishop Tempesta. “It is a call that you experience in your heart. It is not a profession that you go to for economic interests, it is a decision that is not explicable.”

When Father Tempesta was named a bishop in 1997, Abbot Luigi Rottini, head of the Italian Cistercians, said he “always stood for precious human qualities – intellectual, spiritual and pastoral care and love for the monastic congregation.”

In October 2004, Bishop Tempesta was named archbishop of Belem, and in 2009, Pope Benedict XVI named him to replace retiring Cardinal Eusebio Scheid of Rio de Janeiro.