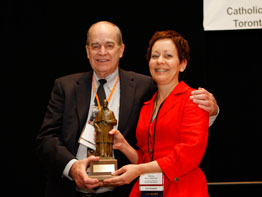 TORONTO – Chic Davis, advertising director for The Catholic Review and for the Cathedral Foundation, was named the winner of the 2008 St. Francis de Sales Award by the Catholic Press Association.

The award, commonly called the “Franny,” is considered the highest honor given in the Catholic press. The winner was announced at a May 30 luncheon during the Catholic Media Convention in Toronto.

“I feel many emotions at this moment,” Mr. Davis said upon being named the recipient. Two emotions, he said, were feeling “rather undeserving” and “extremely grateful.”

Mr. Davis related advice from his father, who said: “Son, whatever you do in life, do it like you mean it.” In the Catholic press, Mr. Davis said, “we have to do what we do like we mean it.”

The nomination letter for Mr. Davis called him “an extremely important individual to many Catholic newspapers. … He brings a lifetime of experience that he willingly shares with his colleagues in the Catholic press.”

“Mr. Davis has firsthand experience in selling a diocesan newspaper on its merits,” the letter added. “He has taught us that we have value, and compels us to bring that message to our business every day.”

It said, “Mr. Davis has raised the bar for members of the Catholic Press Association. … He has redefined what it means to represent our Catholic publications.”

Mr. Davis also has won awards in advertising from the Maryland-Delaware-District of Columbia Press Association.

Finalists for the St. Francis de Sales Award were Regina Armstrong, a proofreader for The Florida Catholic, which covers six of the state’s seven dioceses, and Pam Payne, associate editor of the Catholic Herald, newspaper of the Diocese of Madison, Wis.